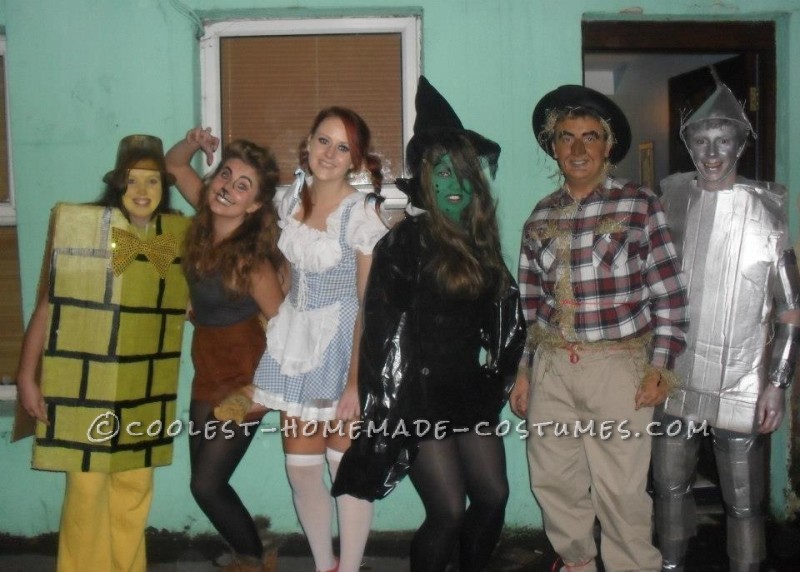 These Wizard of Oz costumes were all handmade except Dorothy’s which was bought in a charity shop. We had bought a TV for our house and used every inch of the cardboard to make our costumes. We were a great  hit that night out and had as much fun making the costumes as well as the going out part. I was the yellow brick road. Pretty embarrassing but great fun (the wizard himself could be another character if nobody is willing to do the all yellow outfit).

I cut out a piece of cardboard for the front and the back and firstly painted them yellow, when that dried I painted on  the black lines. I then tied the front and back up by my shoulders using thin rope. I painted my face yellow and wore yellow pants, hat, tie and shoes just for fun.The song  ‘I’ll follow you’ was out at the time so I took full advantage of that. I had plenty of foot prints on me the next day!

The lion used  face paint to create the look, YouTube came in handy here. She then got yellow tights and stuffed it with hay which stuck out of the tights to give a more real effect (hay was very cheap from the local pet store), she wore brown clothes and back combed her hair to make it big and bushy for the mane. Dorothy’s hair was tied with ribbons and she wore knee high  stockings and shiny red shoes, she received plenty of attention being the normal looking one.  The wicked witch wore a black dress and tied a black plastic bag around her for a cape. She used layers and layers of green paint  in order to look so bright.It took a bit of time before she got back to her real color and she practically  glowed in the night club! She added a few black warts to look the part.

The straw man wore his  normal clothes and just stuffed hay out of every possible place he could find. A tip might be to add a layer of clothes between skin and hay because he  was scratching all night. The tin man took the most effort as he had to spray every piece of cardboard silver first. He used Christmas spray. He connected cardboard to his calf area, his thigh area, his upper and lower arm area, his torso and made a funnel out of cardboard for his head. He also painted  his face and sprayed his hair silver  which was not necessary and smelt pretty funky. I’m not sure how he stayed connected but I do know there was plenty  of duct tape  involved, it even came out on the town with us.

It was great fun making the outfits and we all helped each other  out. We got great praise for how we looked and plenty of people have our pictures from the night. Not a great idea for people trying to find a partner on a night out because the face paints run….as the tin man and witch found out the next day!