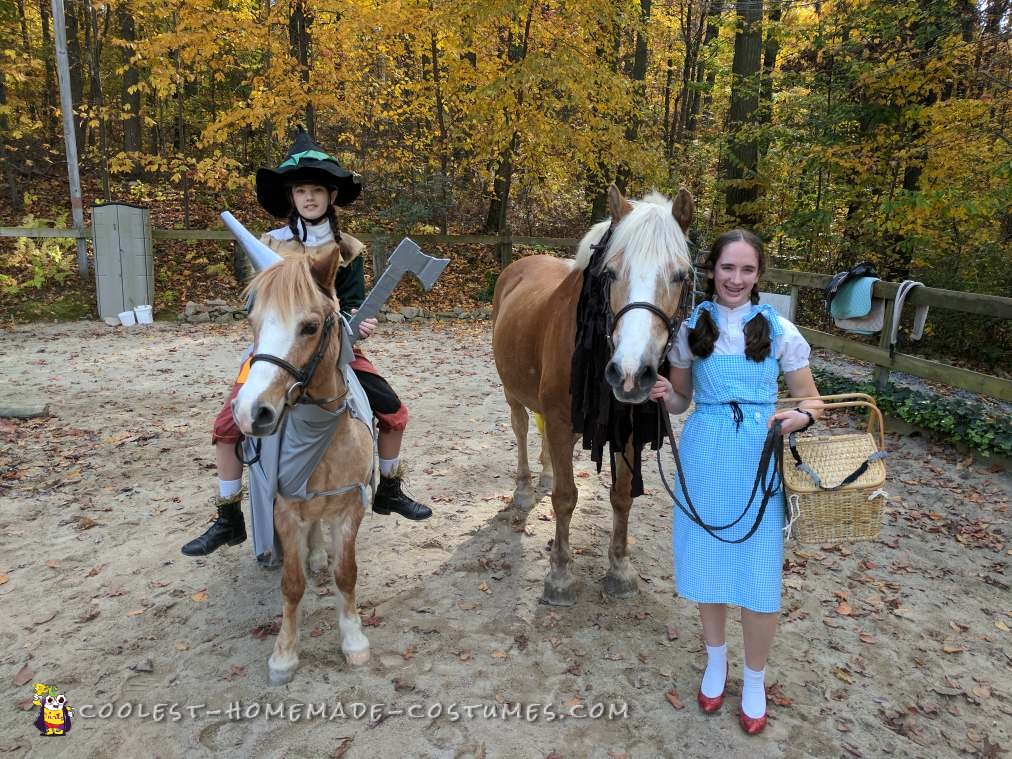 My name is Jillian, and the costume that I made was inspired by The Wizard of Oz. The 5 costumes were made by my sister and I and took about 3 months.

The Dorothy costume was made with 1 1/2 yards of blue, checkered, flannel fabric, buttons, shoes, and glitter. I made the dress simply by cutting a rectangular piece of fabric out and hemming it, then attaching hook and eyes to close it in the back. I then added a skirt with some elastic and sewed straps onto it with buttons. I bought red high heels and then covered them in a glue and water solution and poured glitter all over them. The funniest part about this costume was seeing me try to walk in heels, which is not my normal style! I was also walking around in a ring with sand, which didn’t help my case at all. You could see where I had been by the trail of glitter and holes left by my heels. The Dorothy portion cost about $16 ($5 for fabric, $8 for glitter, $2 for shoes, and $1 for buttons)

The Scarecrow costume was made out of a large shirt and pants. We cut a slit in the shirt, used 2 big buttons to close it, and added some burlap-like fabric to the neck. For the pants we just sewed some patches on it with leftover fabric from another project. The hat was made out of some felt we had lying around the house and a piece of ribbon. We just used hay and baler twine from the stable to stuff her! The best part about this costume was the end, where Ginger (The Tin Man) was allowed to eat the Scarecrow! This costume was probably the cheapest because it used many leftover pieces of fabric and clothing. It cost about $2 ($1 for the burlap, $1 for the shirt and buttons).

The Tin Man costume was probably the hardest. We bought really stretchy material so it would be gracious with our measurements, ponies are really hard to accurately measure! We made a blanket that attached with Velcro, a neck piece that had ties to attach it to the bridle and top of the neck, a hat and an ax. The hat was made out of a funnel we cut and duct taped and the ax was made out of card board and duct tape. The most difficult part was trying to figure out which way the blanket was supposed to go. This costume cost about $10 ($5 on fabric, $3 on funnel and $2 on duct tape)

The Cowardly Lion costume was very simple, but time consuming. We bought about 3 yards of brown flannel fabric and cut it into 15″ wide strips, then cut 1″ wide strips up until about 1″ from the top, similar to the no sew, tie pillows/blankets everyone’s making now. We made as many of these as we could under the shortage of fabric we had (I was trying to keep this low budget) and it still didn’t end up as fluffy as I wanted it to look. I then made a tail with some yellow fabric and elastic/Velcro and then added some extra brown flannel at the end for a tuft. The disappointing part about this was when the tail wasn’t secured tight enough and started falling off during the show! This cost about $6($5 for the flannel, $1 for the yellow fabric).

The final Costume, Toto, we decided to take for a rabbit. It simply consisted of some brown fuzzy fabric and Velcro. However, this was a big moment for my younger sister, Kristel, who is only 11, as it is her first project and I decided to make her in charge of the entire thing. She did a great job, but our rabbit, Carmal, wasn’t very happy about it. I do think she like the day away from home and the chance to meet other children at the barn that loved on her much more than we do.

This costume was a lot of fun to make and required a lot of trial and error. The end result was definitely worth it, however, and it was a lot fun to be able to show it off at our Fun Show at the stable for the Costume Class.