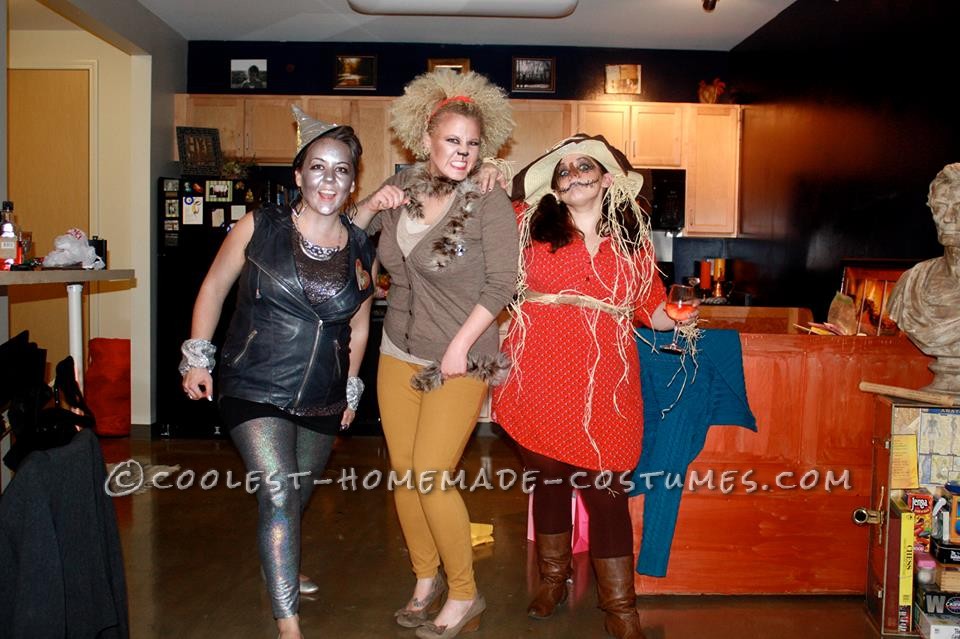 After brainstorming at the bar for nearly two hours one night, my friend and I came up with an idea for this year’s costume. It was NOT Wizard of Oz, but would take a bunch of time to create and wouldn’t be comfortable at a party, so it will remain top secret until we can reveal it at a later date.

The Wizard of Oz idea came from looking at my friend Annie’s amazing curly hair and desperately wanting to fro it out for her on Halloween. At first, I suggested a jungle theme, with her as the lion. No. Then it was the zoo. Still no. I even offered to do her lion makeup, but something wasn’t clicking.

Halloween was getting closer (within a week), and I started looking up tutorials for my own costume ideas, using this site and a bunch of videos. I found an easy, cute makeup how-to for a scarecrow and it hit me: LION, SCARECROW…WIZARD OF OZ!! Annie was sold, and our friend Maureen immediately started thinking of ways to be a sexy scarecrow.

This basically left Dorothy and the Tin Man up for grabs. Given my history of painting my body with metallic spray paint (see: College Football, ridiculous tailgating, previous costume as the Emmy Award) and the relative ease of putting together a last-minute Dorothy costume for anyone else, I quickly started searching for how to make myself shine.

I wanted to stay away from the tutu trend and we all wanted to avoid the slutty college freshman look, so I started searching out any metallic, sequined silver items I could find on sale. This was way easier than I thought! I found a pair of killer silver leggings at Victoria’s Secret, thinking I could pair them with a grey tunic. Then I stumbled on this cool grey leather vest at Wet Seal for like $5 and decided I could do punk Tin Man. Top it off with big silver earrings, red lipstick, a necklace and shoes I already had and a silver shirt from Maurices that I’d totally wear again and I was on my way. YouTube taught me how to faux-hawk my hair and I picked up silver hairspray and body paint from the costume shop. I also painted my nails silver with a red ring finger accent nail on each hand.

On my way to Menards to buy a funnel for my hat, I realized with delight that I could make an axe out of tubing and become a walking Tin Man beer bong. Unfortunately, tubing was beyond my budget (like $30 for 20 feet, and only available in 20′ sections) so you are more than welcome to steal my brilliant idea if you’d like! I covered the funnel with metallic duct tape and made a heart pin out of scrapbook paper to complete the look. (And don’t worry – we were definitely drinking out of the funnel by the end of the night, no tubing necessary)

As for the rest of my crew’s costumes:

Mo wore a flannel shirt one night and a dress she already owned another night, accessorizing each with bits of burlap and straw. She covered a floppy straw hat with felt. Her makeup was super fun. The first night, she did a more traditional scarecrow look, but the last night she did kind of a Tim Burton style with extra stitching and nude lipstick. She was at once the most adorable, sexy and freaky scarecrow I’ve ever seen.

Andrea already had a dress that looked like Dorothy’s, and actually wore nude bootie heels instead of anything red or sparkly. Her outfit was simple and easy, classic, stylish and sweet. She looked awesome and added some necessary sass to classic Dorothy.

Annie found mustard jeggings, and layered on a bunch of brown tops, then added a fur tail which she cut in half to create a fur scarf. She made a little badge of courage for herself out of ribbon and even found fingerless tan gloves with fur on the ends. Her hair puffed out perfectly while still maintaining definition (because it’s awesome) and she had a little red headband b/c hello, that’s what the lion wears. I used another YouTube tutorial to do her makeup with all makeup that we already had. There was nothing cowardly about this lion!

We went out two nights: One night, our crew consisted of the Scarecrow, Tin Man and Dorothy. The next night, we had Scarecrow, Tin Man and Lion. Both nights, we were nominated for costume contests and complimented all night on our outfits. The first night, a friend had independently dressed up as the Wicked Witch, which worked out nicely! The second night, we won the group contest. We also discovered that each character deserved a signature dance move, so Scarecrow Supaman, Tin Man Twerk and the Lion PutEmUp were developed. I also had people ‘oil the hinges’ on my shoulders, hips and knees to loosen me up to dance. Awesome.

Putting a little extra work in to creating a costume rather than buying a packaged piece of cloth was definitely worth it! We had a blast, people loved our outfits and we can wear a lot of it again! 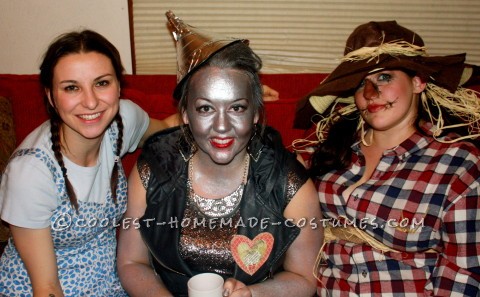 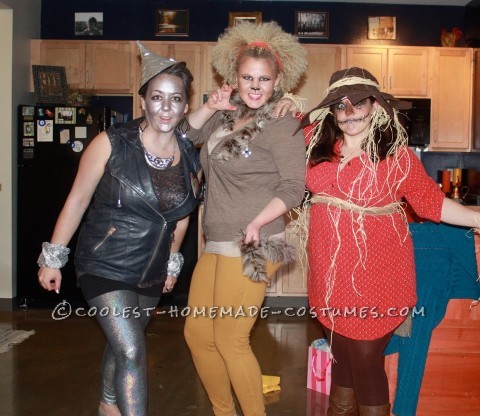 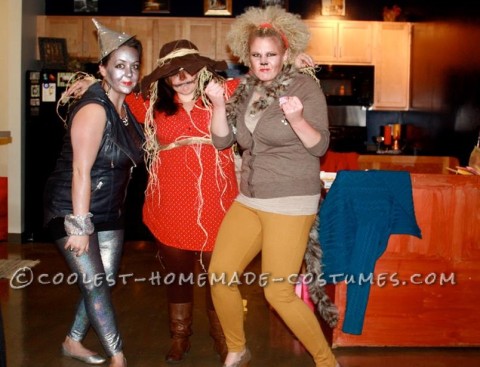 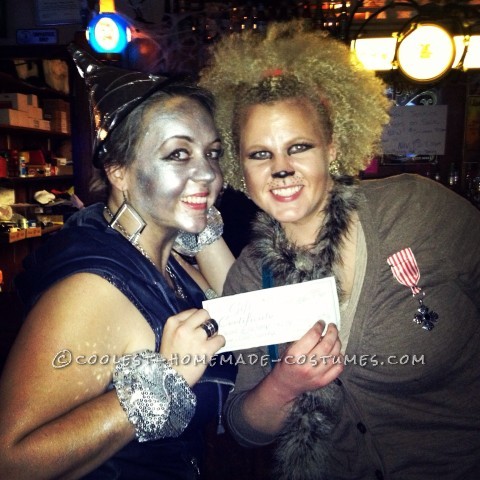