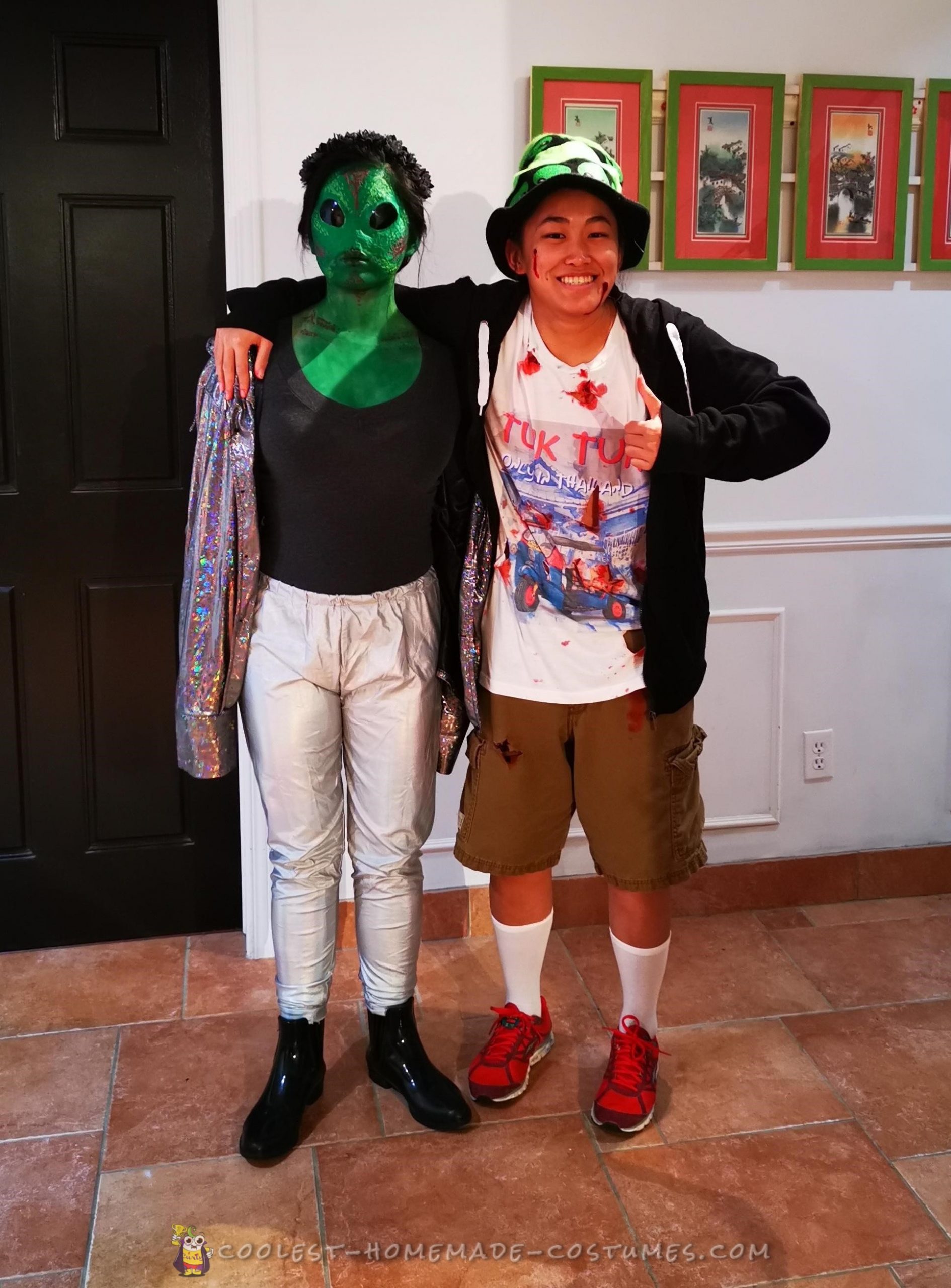 When the Storm Area 51 event landed on my Facebook feed like thousands of planes landed in Paradise, Nevada’s McCarran Airport on September 20, 2019, I knew I had to do something about it. I’ve been going hard on Halloween since 2014 and my sister since 2015, and this was the first opportunity we had to do a couple costume together. We decided that I would be a tourist riddled by bullets from the Area 51 guards, and she would be the alien I still stole.

From transmission via TikToks to naruto running practice, the event was steeped in the rich culture of the Internet Memers. I wanted my costume to evoke in equal parts their figurehead, and the stereotype of the obnoxious tourist. He wears sneakers with socks hiked up all the way, cargo shorts filled with Doritos and sunscreen, and a ratty sweater that’s kept him warm for marathon sessions of Fortnite. He picked up an alien-themed hat once he landed, hoping to blend in with the natives. His t-shirt is tarnished by the aforementioned bullets, but still loudly and proudly declares an exotic location he once visited.

My costume was not too difficult to pick up – any thrift store has old tourist shirts and cargo shorts – but the bullet holes were a bit more complicated. I had three base assumptions: 1) I would be naruto running toward the guards, meaning that the bullet holes would be oblique, 2) extensive briefing meant that guards would be numerous, meaning that I would get shot multiple times, and 3) trained gunmen aim for center mass. I traced the bullet holes with a red eyeliner, keeping the majority on my belly and just a few on my thighs/head. I constructed the bullet hole shapes with Mehron 3D gel, then layered over with liquid latex to set. I adjusted to my skintone with foundation, then used Ben Nye greasepaint to give the holes realistic and deep colouring. Then I used Graftobian blood paste to give them even more texture, and finally dripped regular fake blood out of the holes.

If it could understand the language of the humans, it would probably be impressed that our cultural picture of an alien got it so close. Its eyes are large and black, it has no nose, and its skin is green with dots of colour that help it camouflage with its fauna on its home planet. Clothing is not a concept on its home planet, but when captured in Area 51, guards decided to outfit it with bright and shiny clothing to deter escape, and its boots protect its delicate feet-analogues from destruction from our rough terrestrial planet.

The makeup for the costume, suitably, was inspired by a TikTok about the raid. The base for the costume is a pair of sunglasses lens covered with masking tape placed over the eyes, and taped down her nose. She then smoothed out the edges with liquid latex, and used green Kryvaline water-based paint to cover her face, ears, and neck. A small brush was used to stipple light green and brown for more texture over the head and collarbones. The shiny top was appropriated from a disco king costume, and the shiny bottom was appropriated from a unicorn costume, while everything else was our own clothing.

We went trick-or-treating in the costume, and while some appreciated the creativity and SFX skills, I don’t think anyone understood the reference to the meme. My sister’s classmates and Instagram commentariat got the joke, but she got there too late for the school’s group photo. We met a couple with twin babies who had us take a picture with them for their first Halloween, and that was as good as we were going to get.

The shirt was way too big and I had to adjust it all night so that the bullet holes were showing, but other than that, my costume was pretty wearable. My sister’s costume was not. The expressionless affect worked for the character, but was unintentional, because she literally could not move her face. The extensive makeup strongly restricted her breathing and completely prevented her from eating, until she gave in and cut off a piece of masking tape below her nose so she could take in some air and calories.

Overall, the costume made us both laugh, we had fun, and that’s all that matters. Just kidding, winning costume contests also matters.