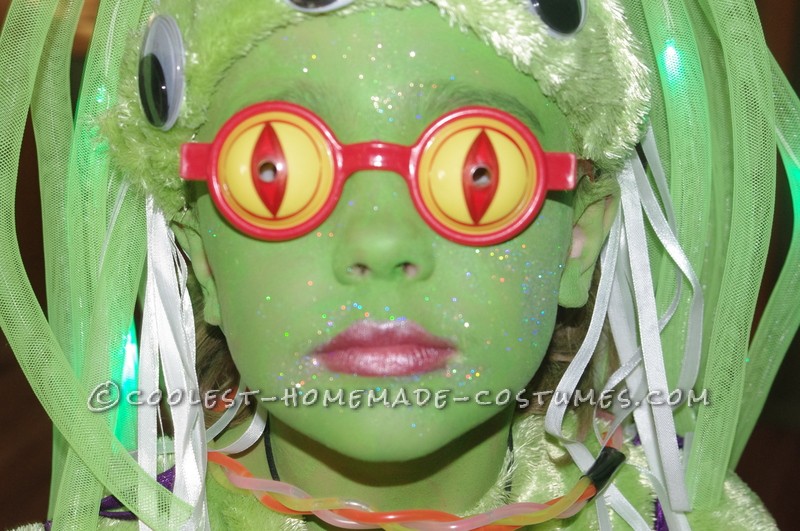 Every year for Halloween, my daughter comes up with some crazy idea of what she wants to be and it is up to me of course to make it happen. This time she wanted to have a costume that glowed in the dark and lit up and we decided to go with an alien girl because I’ve always wanted to make a skirt out of a doggy cone of shame.

Once we figured out what kind of costume we are making, I liked to keep an eye out for accessories everywhere I go. I believe it is the little details that make each costume great. The accessories that we bought for this costume were:

This costume had a lot of pieces!! I will start with the bottom layer which I guess would be the makeup. The green makeup really made this costume amazing! We tried every green makeup that we could find at Wal-Mart on the Halloween isle and the best hands down was the powdered makeup with a witch picture on it. I believe it was the only powdered makeup I saw and you put it on with a wet sponge. It goes on great and gives skin a nice green color and doesn’t come off easily. On top of the green makeup I dusted on some fine glitter which you can see in the closeup of her face. We also used some glossy pink lip gloss because otherwise she wouldn’t look like she had lips.

The next layer would be the fur. I bought green furry material and just made a very simple shirt by folding one yard in half, cutting out a hole for the neck, then sewing along where a side seam would be and then cutting away the excess material close to the seam I sewed. I used the scraps to make gloves (made a tube, closed one side and cut finger holes in it), and leg warmers (tubes that I safety pinned to black leggings). I also made a furry headband by safety pinning a scrap of the fur around a stretchy headband and then glued huge google eyes to the fur. This type of furry material is very soft but hard to work with because it sheds so much when you cut it! I try to sew as much on it before I cut it as I can to keep the fuzz out of my sewing machine and sew with all the fur on the inside. At this point she was just a furry green alien, so I needed to make her some alien clothes…

The shirt is a purple tank top that I painted with t-shirt paint an alien girl giving a peace sign saying “I come in peace”. The skirt is made out of an X-large doggy cone of shame that I got at Pet Smart. I glued a silvery fabric onto the inside of the cone skirt so that it wouldn’t be see through since I didn’t have anything interesting to put under it and I needed to hide the battery boxes for the lights. I used strings of battery powered LED lights that you would use for Christmas wreaths and I found them at Hobby Lobby. I used the multi-colored ones. I used a pointy knife to poke holes through the cone skirt randomly and poked the LED lights through the holes. I used two of the small strings of lights. Then I took duct tape (purple Tye dye color) and taped the whole back of the cone skirt to secure the lights and cover up the wires. I also made a trim on the edge of the cone skirt with the duct tape and used the duct tape to secure the battery packs for the lights on each side on the inside of the skirt. She doesn’t have them on in any of these pictures, but I also made her some duct tape suspenders which were very cute, but she didn’t like wearing them. Then I painted planets and stars onto the cone skirt and used glow in the dark t-shirt paint and some clear fingernail polish that had glitter and stars in it on the skirt as well along with the words “out of this world”.

This costume was eye catching everywhere we went! Her green pigtails had blinky lights, her necklace lit up and blinked, and her skirt had blinky lights all over it. She also wore her twinkle toes Sketchers which light up as well. She was highly visible while trick-or-treating and received tons of compliments everywhere we went and won some awards for best costume and most creative costume.

This costume wasn’t really hard to make, and could be made with very little sewing skills! For a costume that was so easy to make, I think it looks amazing! Also, if you need green body paint for any costume, use the powder because it works the best!

Have a happy and safe Halloween and have fun making costumes! 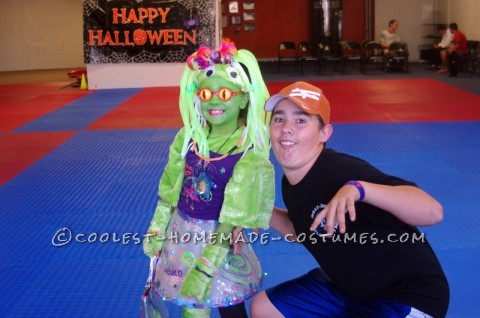 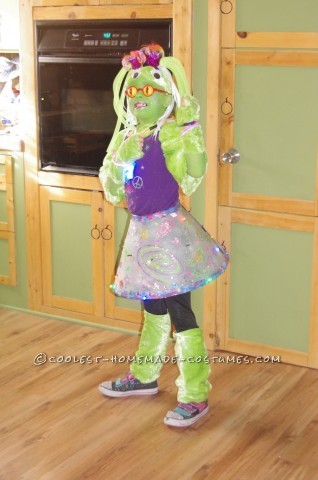 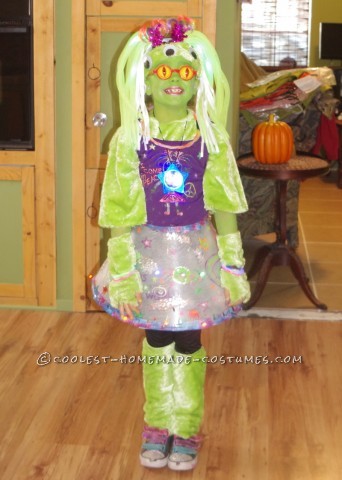 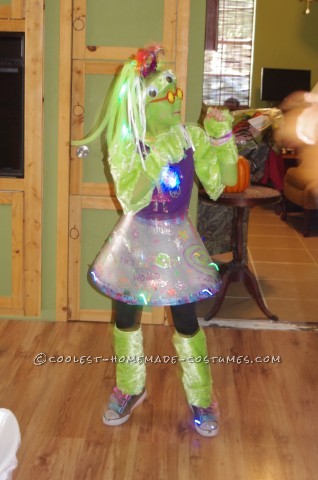 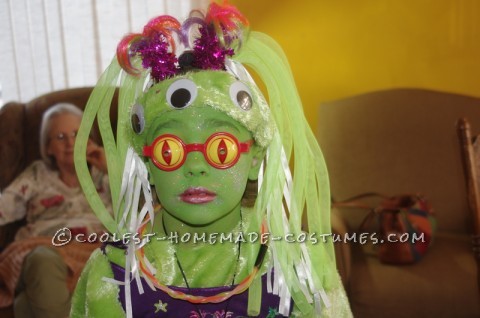 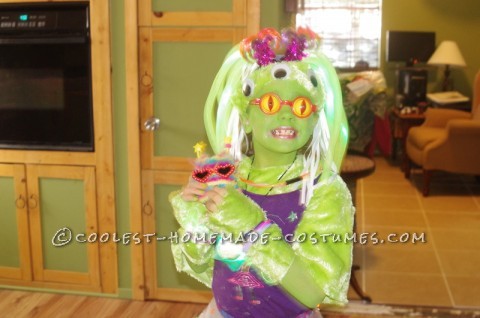