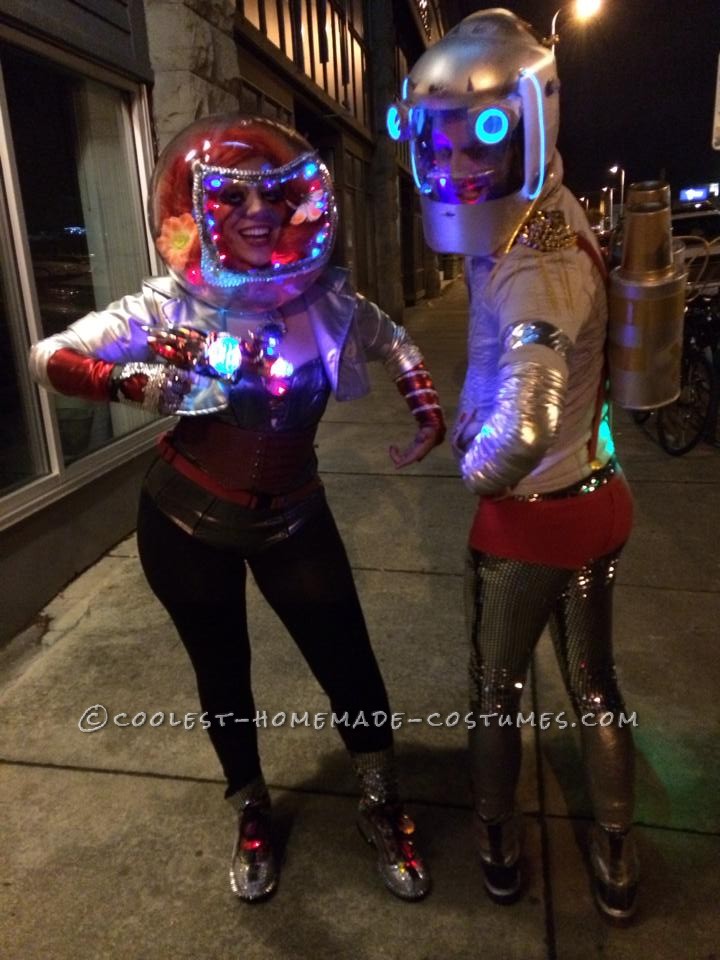 For Halloween this year my boyfriend and I were visitors from space. We gallivanted through town and told people we were just visiting Earth for a short vacation. We spoke in made up languages, shared epic stories of our travels, shot people with the laser gun “dance blasters”, figured out ways to drink and eat with our costumes (straws and a paper plate under my chin!), got heaps of compliments, won a couple little costume contests, and even made it in the newspaper!

It was a hilarious and grand time, and here is the abbreviated story of how we made these costumes. Really, it’s tons of thrifted stuff, spray paint, glue, fancy duct tape, random household things, and light up stuff. We put a lot of work into detail – down to cutting apart a pair of heels for silver arm bands and shoe decals – so I’m only going to highlight the major pieces. I think we only bought a couple things that were new from a Halloween store, and they were the silver leggings that we used as arm warmers and shiny red gloves.

So, a few months before Halloween I came across an amazing silver bodysuit and I knew it had to make a costume around it. I got a distinctive “Barbarella” feel from the beaut and started nerding out on vintage “space fashion”. I made a Pinterest to help organize my ideas titled “How To Look Good In Space”.

I love the fashion of Barbarella and the over-the-top space drag queens in the film Vegas In Space, so used a lot of that for inspiration. I decided that I definitely needed an awesome space helmet and went to search the internet to see what I could find. Well… I didn’t come up with much. What’s a girl to do? Make her own! I ordered a 16″ acrylic globe (made for light fixtures) and an awesome friend helped me carve it out in his shop. We made the opening at the bottom bigger so I could fit my head through it, and also an opening in the front so I could breath! This opening of course needed bling, so I glued on a ton of rhinestones, glitter, disco mirrors, and tiny spikes as horns. I also taped on red and blue finger lights (on the outside the first night, inside the second) to illuminate my face and make my day-glo facepaint pop.

Inside the globe I wore an amazing giant red wig that I found online, wrapped with orange el wire. I threw in some more finger lights and blinky flashing rings for good measure. I also snuck in some neon orange fake flowers that really popped under the blue lights.

My boyfriend made a space helmet out of a welders helmet that he painted and decked out with part of the plastic cut out from my helmet, a spray painted knee pad, finger lights, el wire, and spikes.

I put quite a bit of time into my shoes, as well. They were just some dingy kicks that I picked up from a thrift store. A bit of spray paint, a ton of glue and shiny things, and voila! Disco space warrior boots! I don’t have any great pictures of them on Halloween, but they were covered in more glitter and disco mirrors and lit up. Oh, also, you might notice the “#yolo” charm on there. My name for the night was “Yolanda” or “YOLO” for short. Or, in the great language of OP that I spoke in, “Yopolopo”. My space partner in crime painted some beat up thrifted shoes and put fancy duct tape on them! Shazam! He also made rad jet packs with oatmeal tubs, plastic cups, lights, and old wires.

This was easily one of the funnest costumes I’ve done. My favorite piece was definitely the globe, and I can’t wait to wear it over and over again. A funny thing about it is how crazy things sound in there. Definitely not something to wear to a loud metal show, which I quickly learned! Also, apparently I sounded like I had a reverbing microphone to other people.

So, that’s the story of our costumes! Thanks for reading, and hopopopyop hopaloplopowopeenop! 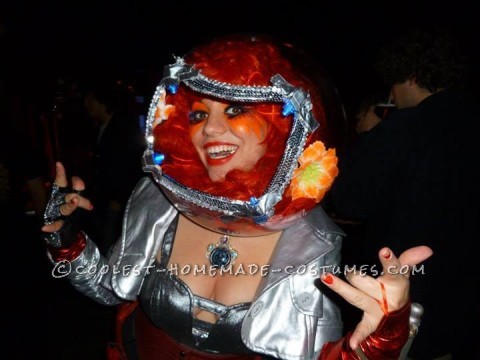 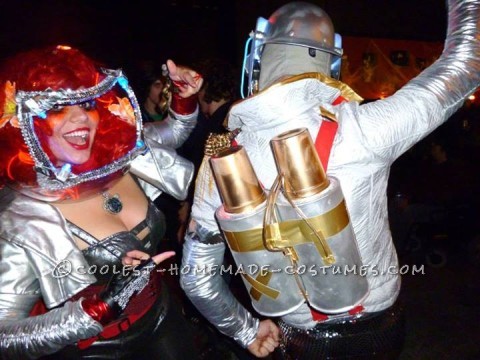 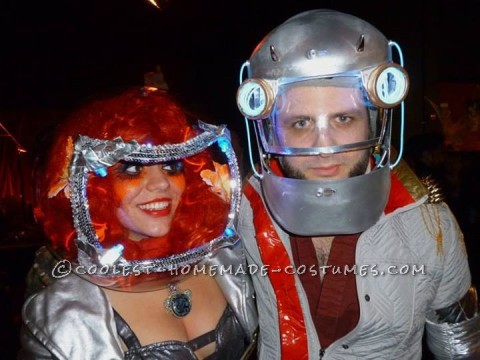 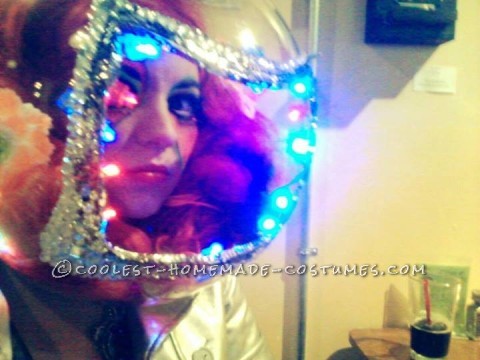 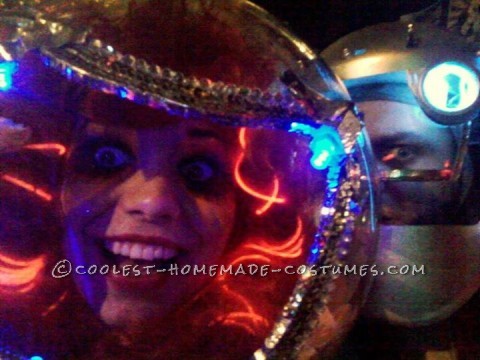 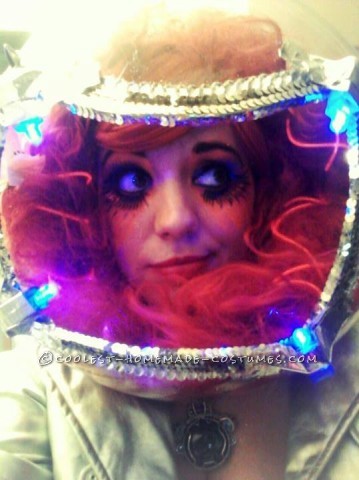 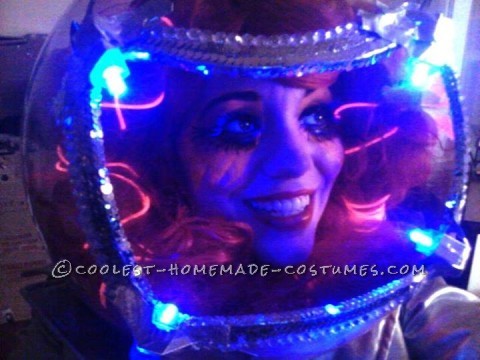 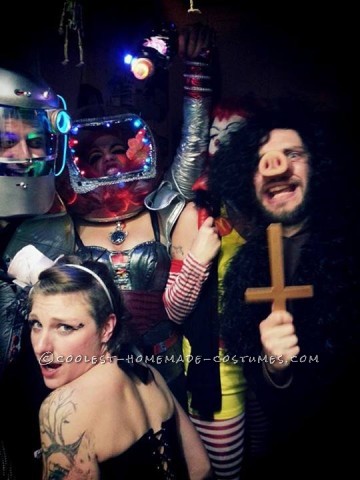 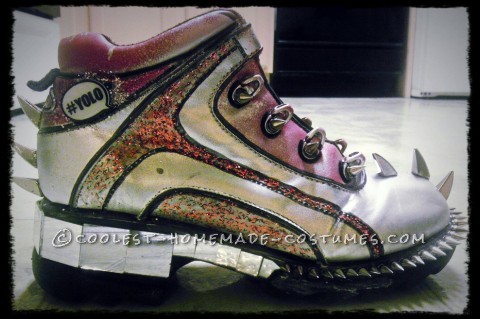