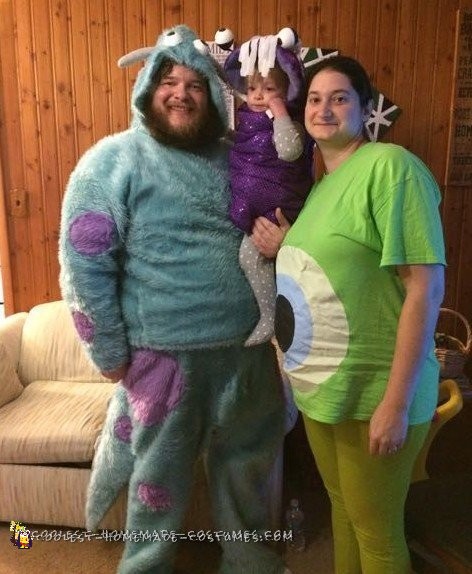 This family Monster’s Inc. group costume was planned as soon as I knew that I was going to be pregnant during Halloween. I knew I wanted to dress as Mike Wazowski and have my pregnant belly serve a purpose! Also, my daughter was at the perfect age for Boo since she was just beginning to talk and had short hair that was always up in pigtails. My husband is a big guy, so Sully was a perfect costume for him.

When I went to the craft store to buy the fabric, I was incredibly lucky to find fake fur in the perfect blue and purple colors for Sully. The guy who cut the fabric for me asked what I was making, but I’m pretty sure he would have known even if I didn’t tell him. I also bought Styrofoam balls to use for the eyes and some gray fabric for the spikes on the tail. I used a pair of sweatpants and a hooded sweatshirt as templates for the sizing of the costume. I found as I was sewing that that fabric was fairly fragile, the fur shed everywhere!

To attach the eyes, I actually screwed the halves of the foam balls into the fabric from the back. To hold the pants up, we used my husband’s suspenders which were hidden by the top of the costume.

My daughter’s Boo costume was made with a sequined fabric on the outside and fleece on the inside sandwiched over some batting. I used ribbon to tie it in the back and to hold the hat on her head. The eyeballs were Styrofoam balls painted with glow in the dark paint and attached to the hat with braided wires which were wrapped in black electrical tape. I made the mop “hair” out of the bottom of a t-shirt that I fringed and sewed onto the hat by hand. My daughter wore a long sleeve t-shirt under the outfit for our party and daycare and wore her jacket under it while trick or treating.

My Mike Wazowski costume was a lime green t-shirt which I painted with fabric paint. The white is actually glow in the dark paint which was pretty cool although the number of coats needed to cover the shirt caused it to be pretty inflexible. I paired the shirt with green leggings (which were very hard to find in a maternity friendly size!). 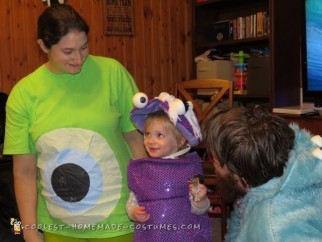 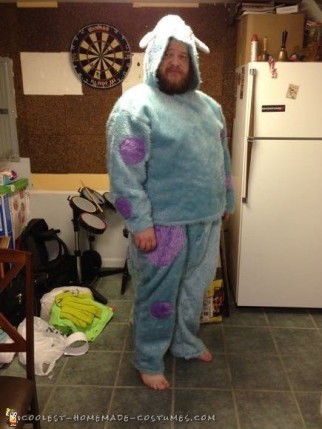 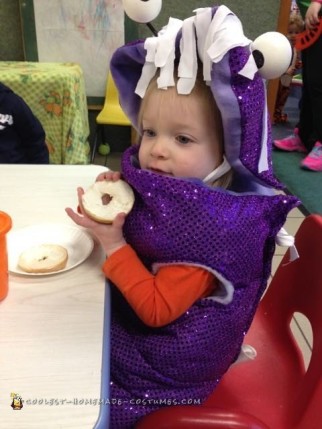 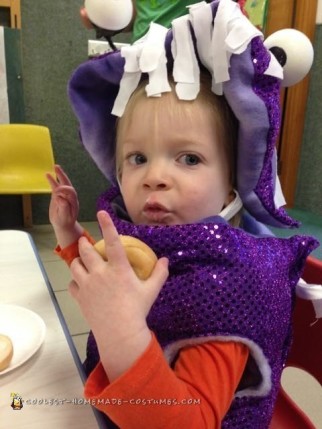 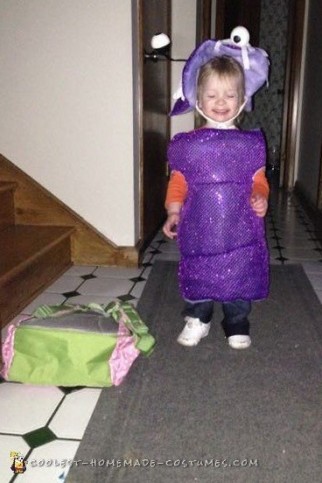