Well, the idea for the Mike Wazowski costume with Little Sister Boo started months ago. I ask my grandson every year what he wants to be, he told me Mike Wazowski from Monsters Inc. So I had to make it happen. I started it one month before Halloween. Starting with the shape of the body I made a frame out of heavy cardboard. Once I got the cardboard the shape I wanted I cut a total of 6 and made the base frame. I then coated the inside of the frame with light cardboard then filled the frame with spray foam that expands 4 times the initial spray.

Once it dried I then carved the the shape of the body, carved the mouth and where the eye goes I covered it with 3 triple x large green t-shirts. After getting the t-shirts glued tight with a hot glue gun I cut the shirt for the mouth and holes for the arms. I made the eye out of felt, the mouth from black foam, the tongue from foam covered with dark green felt. The teeth and horns are made from a rosin mixture then shaped, sanded and painted to look authentic. That just about completes the body.

From there I needed feet, starting with an old pair of my grandsons shoes I glued foam to the front of the shoe then carved with a sharp blade three toes and covered the entire shoe and toes with the t-shirt material. As for the toe nails I used the rosin mixture. When it dried I shaped it to look like nails and glued them to the toes. The last thing to make were the hands. I got a pair of gloves, covered them with the t-shirt material so it all matched and made fingernails from the rosin mixture, shaped them to look like nails and glued them to the hands.

Last but not least was the hat. It is 4 times the size of a normal hat. I looked at a regular hat, figured out the shapes I needed to make the hat and started. To make the hat I used a mesh material that is used for cross stitching so I could get the shape I needed. I covered the hat with felt painted on the stitching lines and painted M U for monster universe on the front of the hat. The hat is where my Grandson looks out of so I used a black nylon in which I painted part of the M U on so it looked like Mike Wazowski in the movie but he could see out of for safety. For the legs and the arms I got a t-shirt and he wore 2 pair of green leggings. He was a hit.

As I was making it at one point it wouldn’t fit thru the doors. I had to shave it till it would fit. I also glued my fingers to the costume so many times. My wife was laughing. My grandson won first place in the fall festival in Barnegat N.J and was a big hit taking many pictures with kids and adults and to add to his costume his mom made his sister Boo from Monsters Inc. She is five. it added to his costume.

On Halloween night every one was calling out Mike Wazowski taking pictures and the people giving the candy all loved his costume. He was getting two sometimes three pieces of candy because they said it was the best costume they have seen.

I enjoy making the costumes. I have been making them for him for years and decided to enter a contest this year. Whether I win or lose, to him I’ll always be a winner. 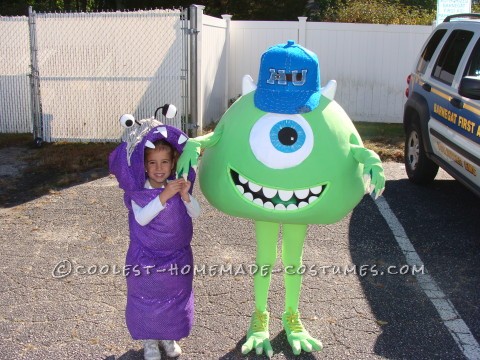 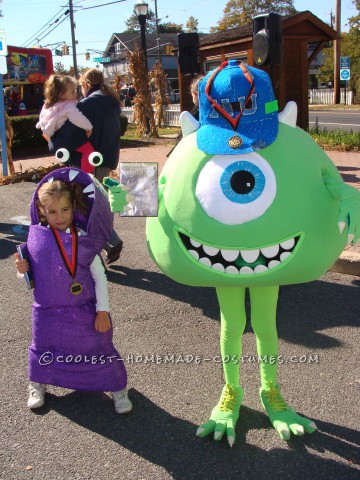 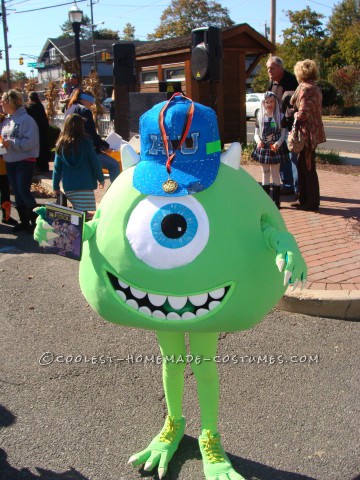 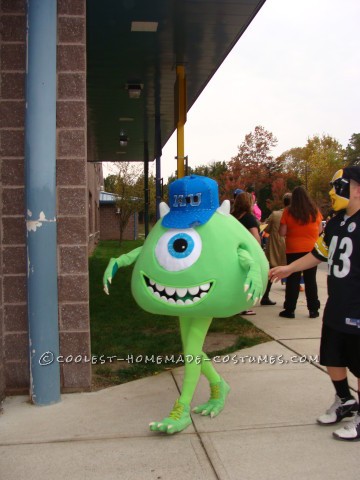 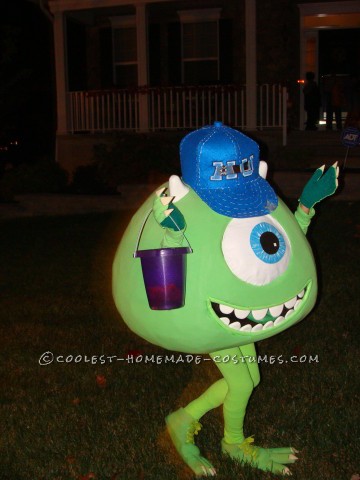