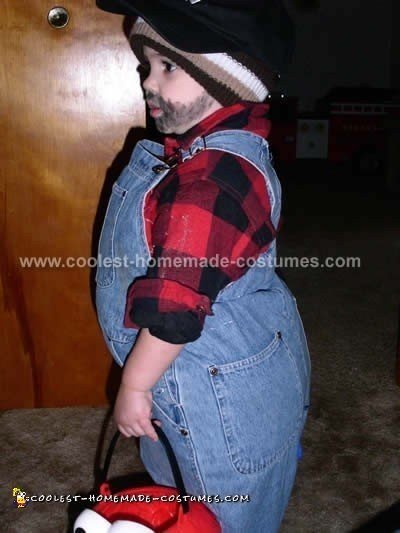 I started this easy Halloween costume idea by going to Good Will and doing some shopping. I found an old flannel jacket that was about a size to small, so the sleeves were short. Then I found a pair of work boots that were worn and a pair of overalls. At the time my son was two years old and wore a 2T. The overalls were size 14.

I stuffed lots of plastic bags like the ones you get at the grocery store inside one bag and stuffed it into the overalls. In the chest part of the overalls I sewed on a pocket on the inside and stuffed the bag into the pocket. Then I had to cut down the straps to make the bag fit right on his chest.

For the large butt, I stuffed two plastic bags and did the same by making two pockets and stuffing the bags into the pockets. I then had to hem the legs to fit so he didn’t trip. I then took some hankies and sewed on some patches to give it that old look.

I took the whole outfit outside and rubbed in some dirt. I also found an old stocking hat around the house and borrowed one of grandpas old baseball caps. I added a little face paint, found a large twig and attached a hankie and thus we had ourselves a two year old Hobo!

Everyone commented on the Hobo costume all night!

He won first place in our town contest.

This is a basic Halloween costume idea. All you need is an old pair of pants, a shirt, a wig, a beard and some Austin Powers teeth.

Rip up your pants and dirty them with some paint. You can do the same with the shirt. Then get some cardboard and a sharpie and make a sign. I was walking in the park and looking at this one homeless guy, when this costume idea just clicked.