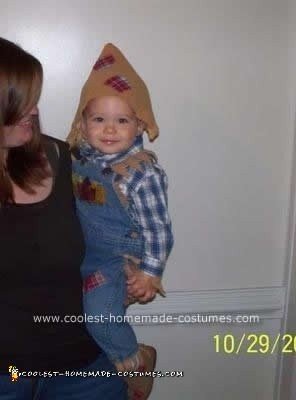 I wanted my son to be a scarecrow for Halloween but I wanted something homemade. At least three people I know also chose scarecrow costumes and they all bought the same one from the store. It was nice to have my son in something different. And it meant so much more to me that I made this Homemade Scarecrow Toddler Halloween Costume, and I think it turned out really nice!

First I went to the thrift store and found a plaid shirt and overalls in my son’s size. I also bought a second plaid shirt in a different color. I bought a yard of tan fleece and some invisible stitch (fabric glue that will replace sewing) from Walmart. I bought some decorative leaves from the Dollar Tree. My sewing machine has been acting up, other wise I would have just used the machine.

For the hat I cut two triangles of fleece, 11x11x13.5, and glued them together. When they dried I turned them inside out and then cut fringe in the bottom of the hat. I then glued patches on both sides of the hat.

I used one of my son’s old pairs of shoes that are pretty scuffed up and I hot glued on tiny patches of material from that second plaid shirt. Since the shoes were scuffed up anyway, it really added to the scarecrow look.

The costume was awesome because it was cold out and the costume kept my son warm. I let him wear pajama pants and shirt underneath the outfit one of the nights he wore it for extra warmth and you couldn’t even tell. The hat kept his little head and ears warm too.

If it had been colder, I think that white gloves would have looked adorable with this costume. 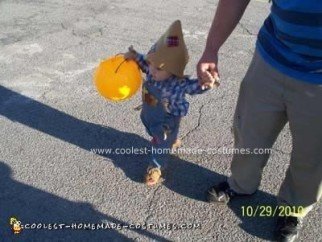 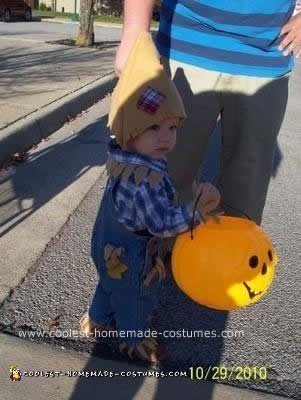 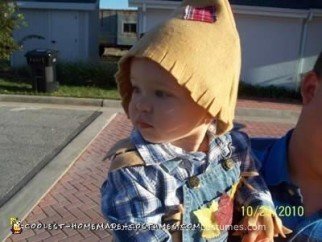