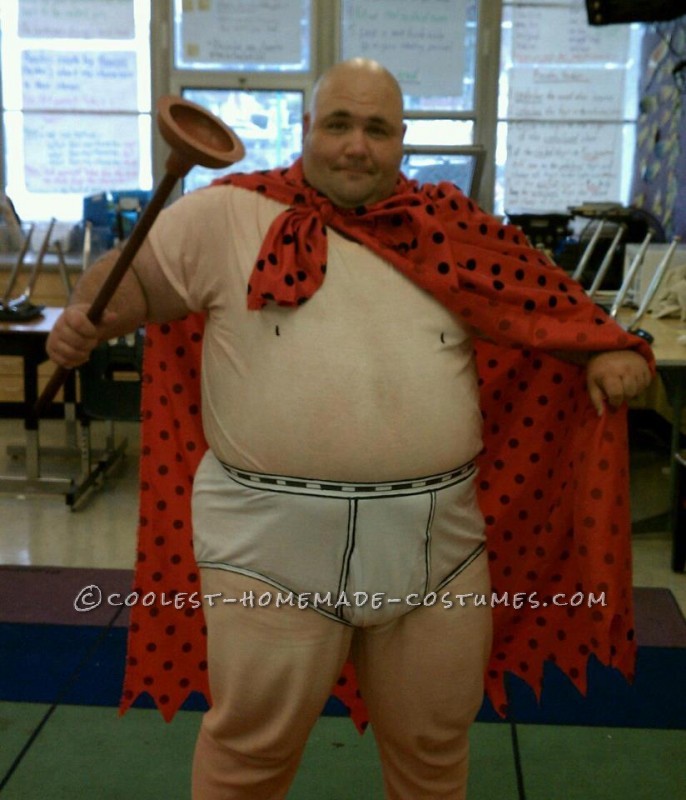 This  Captain Underpants costume was easily the simplest costume I’ve done in the past 3 years. The hardest part was shaving my full beard and going clean shaven after over 2 years of wearing a trimmed beard!  JoAnn’s Fabrics was a time saving stop  en route to completion. I bought the plunger new for $3.49 at a local hardware store. (This goes with book 2 of Captain Underpants.)

This is a really an easy costume to assemble.  First, I bought the fabric for the cape and cut the bottom to match the book illustrations. This was a no brainer and cost about $5.

Next, I got a pair of underwear that was 3 sizes too big and outlined them with a black Sharpie. The toughest part here was tracing the fabric around the legs, but slow and steady worked well.

Finally, I bought thermal underwear and used an old white undershirt and dyed them. I used Rit Liquid Dye and mixed 1/4 tsp of tan with 1/4 tsp of rose pink in 9 oz of water, and did this several times until I had enough to dye both items. Oh, and I added some table salt, but I kinda eyed it. This was the most time consuming part. After dying it, I dried the pieces without washing them. (I prepared the costume late at night on October 30th and didn’t want to risk it washing out.) In order to make the nipples, I drew them on the way the illustrator does in the books.

I wore my regular underwear and tank top underneath it all and it was very comfortable. I teach 5th grade, and wore the costume to school. Our school shares the campus with a charter school.  The kids were falling over themselves. One of my students went around convincing the younger kids that I was the “real” Captain Underpants, and, as a result, I was inundated with requests for high-fives.

The adults were giggling and everyone wanted pictures. When someone didn’t know who I was, the kids who were in the know would inform them and leave off with,”You should read the books, they’re great!” As a teacher, that is a total win!