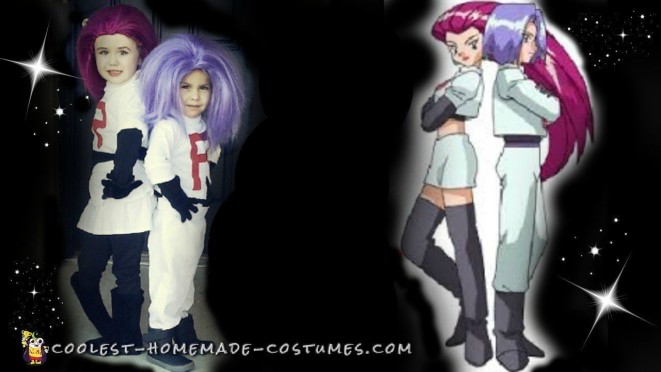 I was amazed when I thought about these Team Rocket costume ideas and found out that it wasn’t too common anywhere really. Especially because it didn’t take much time whatsoever to put it all together; which is always a plus in costumes!

The only thing that took time was ordering both Jessie and James wigs and painting the “R” on the T-shirts for their symbol, which is not much at all, which makes it even more awesome! All I did was cut the T-shirt to make it appear kind of into a “crop top” and with acrylic paint went in with a sponge brush to paint the “R” and the rest of the outfit just had to go on we didn’t need to cut or paint anything else!

We first went out to the zoo for some trick or treating and had a lot of positive feedback! Especially from teens! Until a young boy yells, “look mom!” pointing at the kids in their Team Rocket costume, and she responds, “awe yeah trolls, how cute!” She thought they were trolls!! We had a good laugh, and continued walking while the kid explained to his mom that they were NOT trolls!

The rest of the evening was all great compliments! The awesome thing about this idea is that we (my other half and I) were able to use the same wigs and pull the rest of the complete outfit together for another year of Halloween.

We wore them to Disney World’s Mickey’s Not So Scary Halloween Party and received tons of awesome feedback! We had people not only excited to see all the characters that were at Disney World alone but excited to see us also! It was hilarious! We did feel pretty cool!

We Were able to not only make one memorable Halloween with these costumes but TWO of them!!