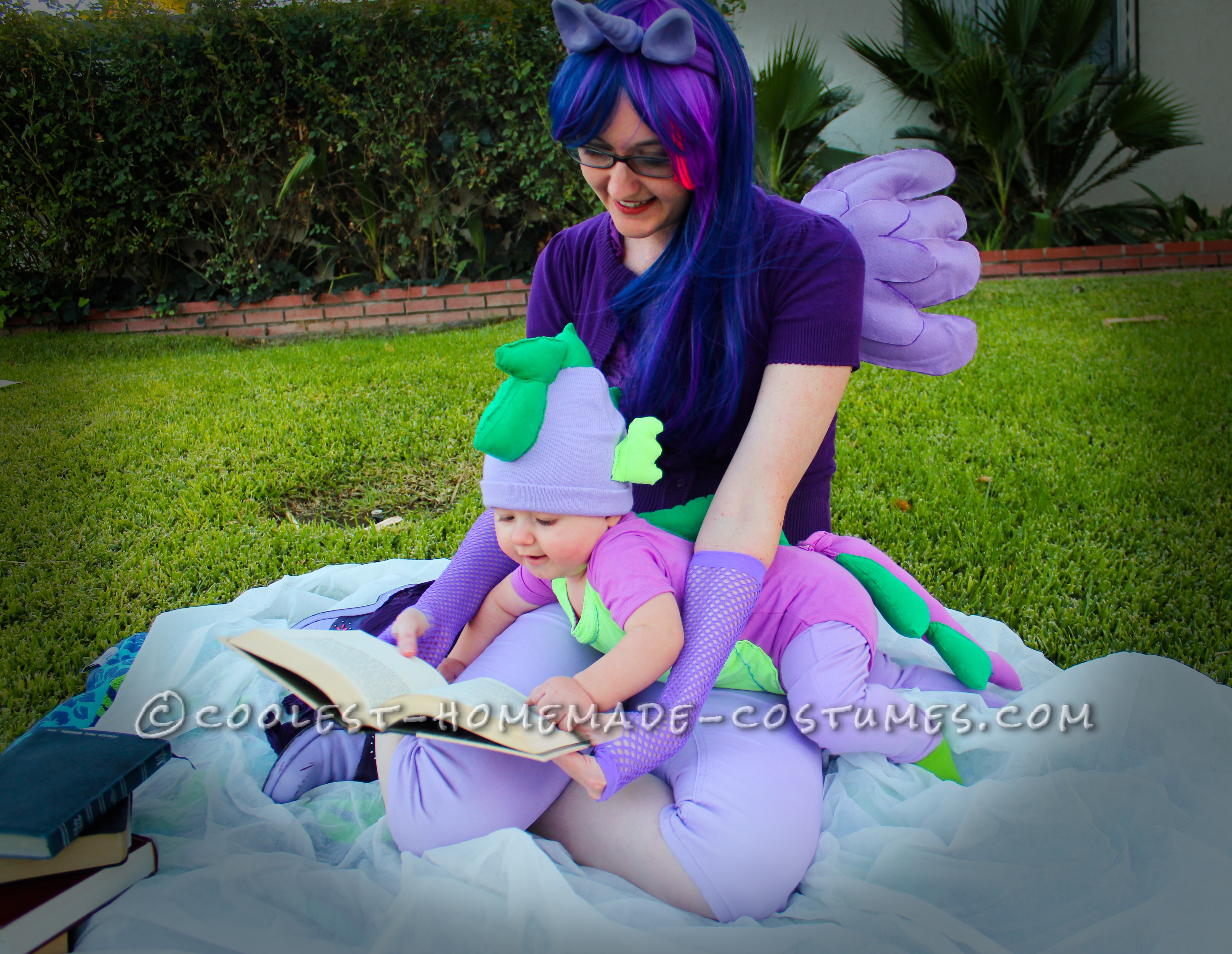 We looove to dress up. Now that I’m finally a mom (we adopted our son this year and were so excited for his first Halloween) I thought it would be cute to do a mom/baby costume that was cute for both of us, and as a big My Little Pony fan, I had the perfect option… Twilight Sparkle the unicorn and Spike the baby dragon! And our proportional size difference worked in our favor. Spike is pretty tiny!

Wanting to stay within a small budget, I bought most of the costume materials (except for the wig; that was Ebay) from the local 99 cent store and Goodwill. First, I found as many purple and lavender items of clothing as possible in my size. Twilight Sparkle’s character is a little geeky, so I picked out a cute sweater vest for a “schoolgirl” kind of look. I even found purple pants! Had I not found any, I had planned on choosing white clothes and possibly dying them. For Spike’s costume, I looked for baby clothes in purple, and found some cute pants. I found old brown clogs and repainted them purple with acrylic paints, even adding a diamond cutie mark. I found a purple onesie and beanie hat at 99 cents only, and bought a large adult size tee shirt to use for the spikes. Then I found cute purple accessories to spiff up my Twilight outfit at 99 cents, like leg warmers, fishnets, and a dress up tutu.

Next, I cut out a large green oval and triangles for spikes and sewed them to the onesie and the hat, using purple embroidery thread to create scale lines on the belly. The spikes were stuffed with cotton and sewed on by hand. I also cut out wiggly ear shapes and put them on the hat. (A reference picture of Spike was helpful!) For Spike’s tail, I used a second onesie in the same color and cut it into a triangle, then used the onesie’s snaps to attach it to the rear end. This is helpful for when the baby is in a car seat and you don’t want the tail in the way!

Twilight’s wings were made using dollar fairy wings as a base, then I just cut the wire into lines that could be bent as needed. I looked at a reference picture of Twilight’s wings and cut pieces of felt out to match. Then I hot glued them around the wire wings and stuffed them with cotton. For Twilight’s ears and horn, I used simple $2 air dry clay that I found at a craft store (Crayola Model Magic could also work), sculpted the shapes, let them dry, painted them purple, and hot glued them to a purple headband. The air dry clay is perfect because it’s lightweight. It’s great for costume accessories… I even used them to make “Spock ears” for my husband! (We took pity on him and didn’t make him be a pony, haha…he would rather be a Vulcan!)

Since he just learned to crawl, my little dragon really got into character, scampering all over the house with a big grin! He also turned into a big flirt in the outfit, which is quite fitting to Spike’s personality. Warning…this outfit will bring a flock of ladies around any handsome little man! We got lots of compliments.

Most people just assumed we were a unicorn and a dinosaur, but a few true My Little Pony fans figured it out. :) I love that we were able to get a really fun, accurate costume using just dollar materials! It was comfortable for both of us, and my son will be able to play dress up with the hat as he grows. It was a really fun project, and fairly easy to put together with a budget! 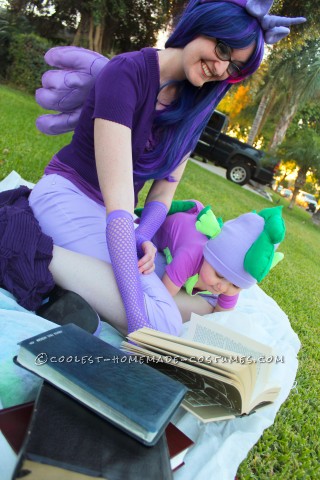 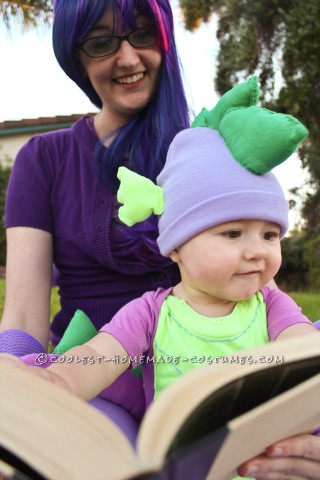 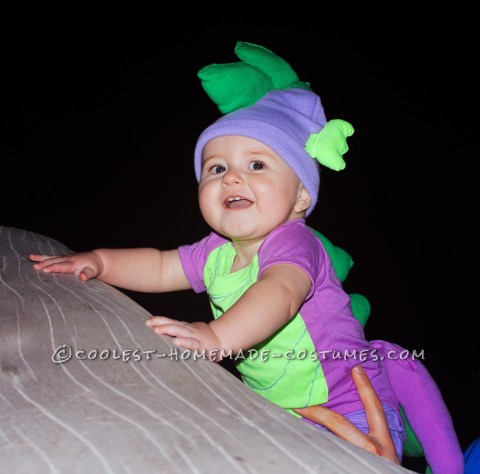 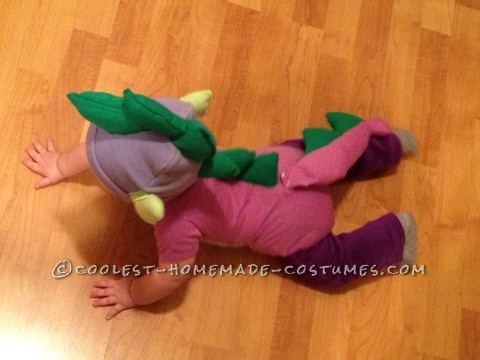 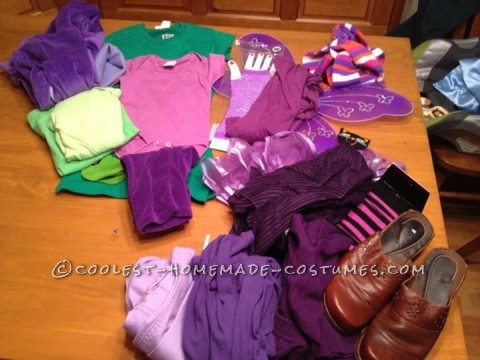 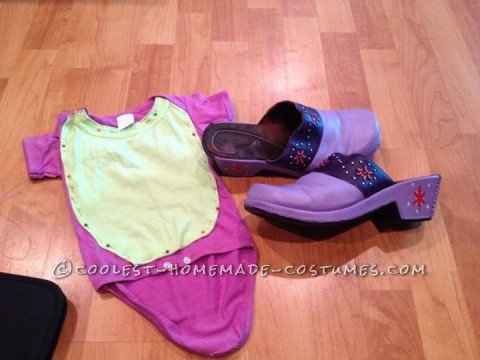 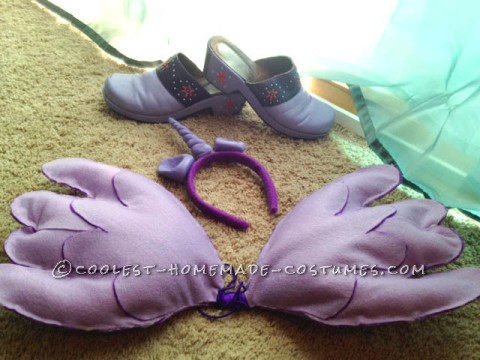 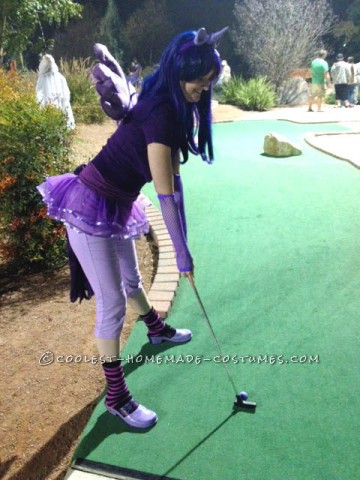