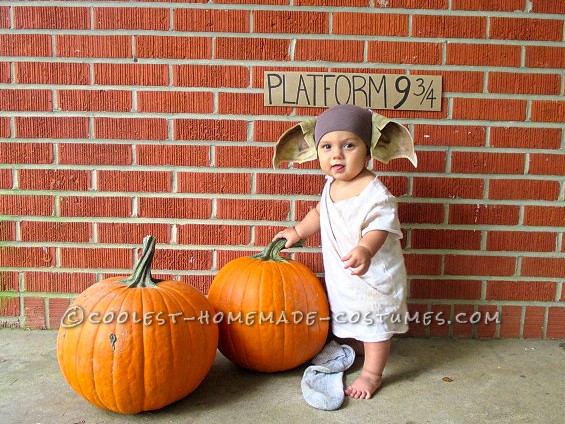 I have never been one to buy a costume for Halloween so when it came to dressing up my son for his first Halloween, a store bought costume wasn’t going to cut it either. All I knew is that it needed it to be comfy and warm for my 9 month old to tolerate it. I have enjoyed every single Harry Potter movie so it’s no surprise that my mind drifted there when trying to come up with a costume. I thought Harry would be too popular, then it came to me- Dobby the House Elf! He is one of the cutest characters and has a small frame so it makes for a perfect baby costume! Making the costume is super simple:

1. With only two pieces of felt (one for each ear) I created the ears. The Walmart here only had white felt so I had to color it with some pastel chalks I had, it worked out great. I pulled up a picture of Dobby on the internet and went by that. I used a darker pastel to shade in the ear details. The ears are one piece, folded over and glued, to give them a 3D appearance. This was probably the hardest part, but once I got the felt and was able to mess around with it, it wasn’t so hard.

2. I then hot glued the ears to an old beanie I had. He has pretty much grown out of it so it is snug and worked perfectly.

3. The outfit is just a toddler size t-shirt I rolled around in dirt. I cut one of the sleeves off to then tie it in a knot. I also cut the ribbing off to give it some unfinished edges.

4. Of course, I couldn’t forget the sock! I wanted a free elf so I used one of my husbands old white socks and let my lil guy carry it around.

It has been warm here so I haven’t had to worry about the short sleeves in cold weather, but if it does get cold, I have a long sleeve white onsie that he will wear underneath. The good thing is that his ears will be protected with the beanie! So far, I have gotten great responses. Everyone thinks it is a very creative and adorable costume. My husband cannot stop laughing when he has the ears on so there have been a few evenings we just let him wear the ears around the house. It is pretty hilarious watching him crawl around and dig through his toy chest with those big ears. My favorite part is that I have not seen another Dobby, and I don’t think I will! It’s one of the more creative costumes I’ve come up with and am very happy with my little house elf :) 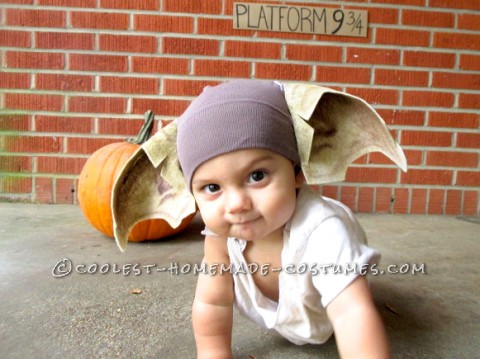 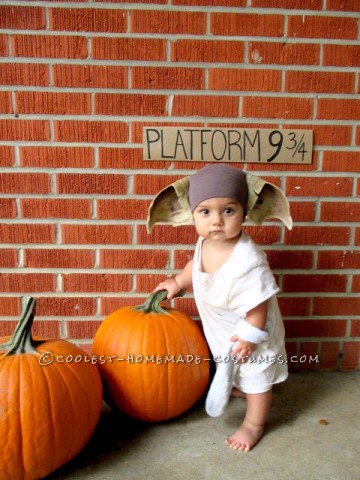 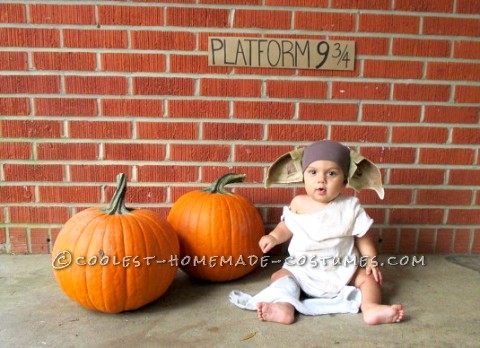