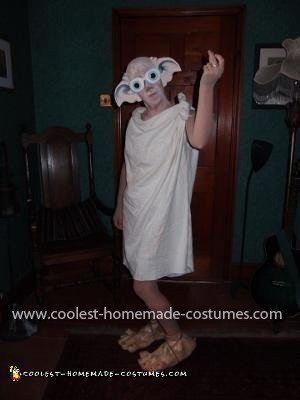 When we were invited to go to a Halloween Party, I immediately thought of going in a Homemade Dobby the House Elf from Harry Potter Costume. My friends call me “The Gnome” anyway because I’m so small so I thought Dobby would be ideal. I started looking at pictures on the internet and there are three main “Dobby” features that are his googly green eyes, floppy ears and “pillow” case rag dress. I was going to make the eyes out of half a ping pong ball and attach them to my head somehow but whilst in a local cheapo hardware shop. I found a box of large sunglasses for sale at 50p a time so decided to paint eyes on them instead, leaving an unpainted “pupil” to see through. They had the added advantage of being able to attach Dobby ears to the frames so I was very pleased with this idea.

I cut out some Dobby shaped ears from a cardboard catfood box and added some polyfilla to create a bit of shape and then painted in more shading so they looked a bit more three dimensional. I used nose putty for my nose but it fell off towards the end of the evening so wasn’t a great success but it did add to the Dobby face so was worth doing.

The “pillowcase dress” I made out of an old decorating sheet, stapled at the sides with a bit left on one side to tie together around the shoulder in a big knot. The only “ready made” item I bought were some huge rubber feet that I tied onto my own over trainers. I wore tights on my arms and legs to keep warm! 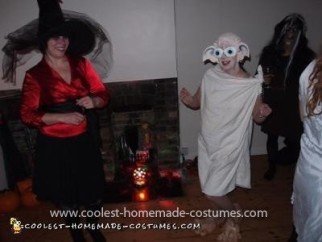