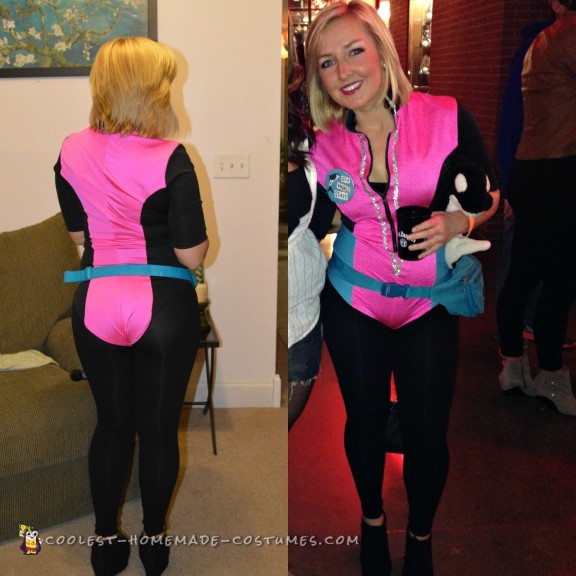 The inspiration for this costume was one of those random thoughts you have that lead to another random thought. About three weeks before Halloween, I had seen a toy rubber duck at work and it reminded me of a Barbie I had when I was little, 1996 Ocean Friends Barbie. She came with a toy rubber orca and as a kid, I was disappointed that the toy orca did not have a blow hole and so my dad heated a nail over the stove so it would melt a hole in the rubber and create a “blow hole.” That random memory then made me think about that Barbie and I was sad that I did not take care of her as a kid and no longer had her, yet I was able to still keep my other many Barbies who weren’t as cool! Missing her, I went to ebay.com to search for my long lost Barbie and once I found a picture of her, I instantly recognized her and her vibrant pink wet suit and fell in love with it all over again. I silently cussed at myself for not taking care of such an awesome toy. If you put her into cold water, her legs would turn black like she had on wet suit pants. I admired her form fitting wet suit and I then instantly thought about how neat of a costume that it would be and I would be able to pay tribute to my beautiful Barbie.

The items for my costume were a bit of a challenge since I was not going to be able to find a wet suit like that with 2 weeks before Halloween and I wasn’t sure what material would be similar to a wet suit. I tried my luck at a few different fabric stores and then tried Hancock fabrics and to my amazement they had every color and fabric I needed and for awesome prices. I was also able to find a pattern by McCalls that was a misses’ zippered bodysuit by Yaya Han. I bought Lyrca fabric for the pink of the suit since that was going to be a majority of the color and used polyester for the blue and black since it was less expensive. The silver trim on the collar was from Hancock Fabrics as well. I already had some black stretchy tights but I did buy the watch (which is an actual snorkel watch) and the fanny pack, again with happy memories of childhood, from Amazon.com. Since walking around with flippers is never easy or attractive I opted for black wedge shoes since the black shoes would blend in with the black tights. I also bought a bag of Swedish Fish and Gold Fish crackers to hand out as my “whale treats”. I also made a pin out of old toy packaging that said “Sea World Staff” in case someone didn’t know what I was, because you know there is always going to be that person. My friend let me borrow her stuffed orca that she had actually bought at Sea World. The biggest challenge though was creating the “wet suit.” I know how to sew, but had never sewed any patterns before and so I had my sister help me. Figuring out where to stitch the patterns like it was a puzzle. I was afraid that if my collar was not standing up around my neck, that it was going to look like a track jacket, so I reinforced some wire around the collar and then stitched black fabric over it. Overall, I spent about $40.

I had told my coworkers and friends about my idea and that I was going to sew a “wet suit” and many of them doubted I could pull it off but little did they know I was a master of crafts. Once I posted my photos of my costume onto social media and they were able to see the results, they were astonished by how well it turned out. I didn’t expect anyone at the Halloween parties to to get my costume, but surprisingly ladies my age remembered the same Barbie and they couldn’t believe that my costume was homemade. I would like for you to know that my costume is 100% original and it was handcrafted with many intense hours of manual labor with needle, thread, sewing machine, glue gun and input from family. Mostly thanks to the happy memory of my dad making my toy orca just right. 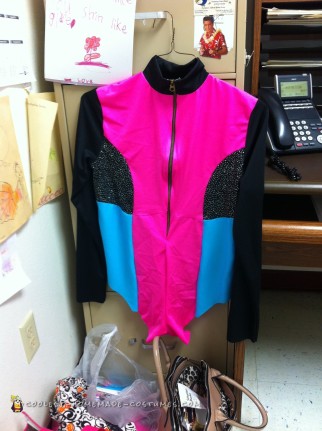 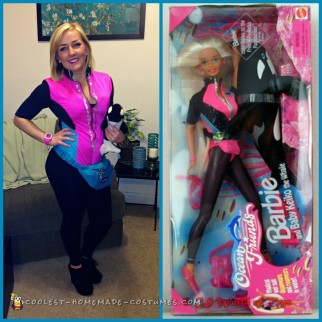 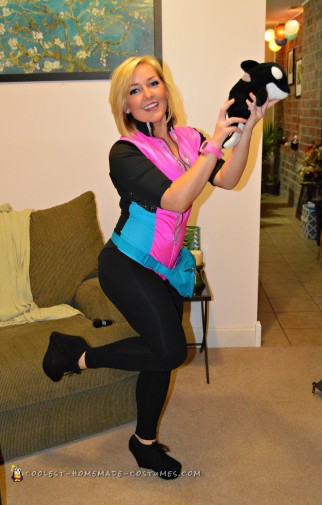