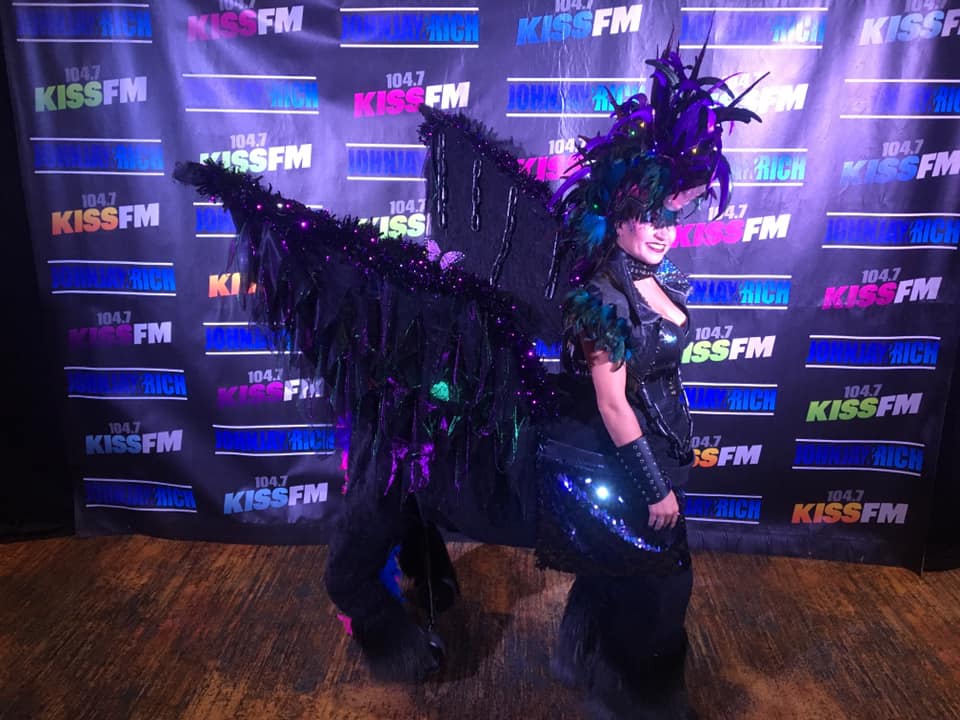 This Dark Centacorn costume was originally inspired by Fantasia. I combined the characters of the black pegasus, the centaur and a unicorn to develop my own hybrid mythological character. The Dark Centacorn.

My goal with this costume was to have the back legs look like they were walking and be super majestic – mind you I am no engineer. It took months of work and dedication to create a skeleton of pvc pipes that were fully functional as “joints” and mount them onto tricycle wheels with alternating pins (similar to bike pedals). I can’t lie and say it was easy. It wasn’t. And there were a lot of tool throwing instances followed by glasses of wine during the creation process.

After the skeleton was up and “running”, I covered it with chicken wire and bent the shape to look like the belly and ribs of the horse. Ta-Da, now it’s coming together. The back legs were bulked up with bubble wrap and masking tape to keep it light weight. The fur was the easy part – similar to wrapping a present. Then I added a belt to make it easy to disassemble because let’s face it – I was going to need a restroom sooner or later.

Once this was accomplished I started the wings which were simple. Again, more pvc. I covered all parts with fabric and details such as lights and shredded material to give it depth and pizazz! I then made the headpiece which I knew I wanted out of feathers – because feathers are beautiful, and majestic right?  I reflected on a youtube video tutorial on feather mohawks which was super helpful! I added lights and the horn as my final touch.

The rest of the pieces were easy, corset, decorated bra, armor. Put it together for the first time last Friday and I was in awe of how beautiful it was. This Dark Centacorn costume has brought me many smiles, photos, compliments and jaw dropping reactions when it “walks” into the room. It is absolutely my all time favorite creation. I hope you enjoy it too!