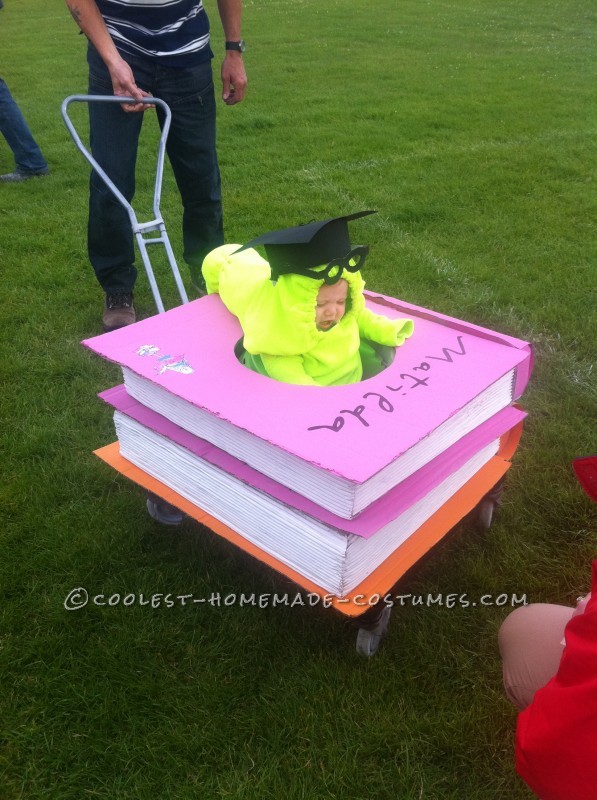 I made this costume for a local fancy dress contest fro my daughter who was 6 months old at the time.

The main part of the costume was made from foam from an old sofa. I used two large cushions and cut holes through the middle so my baby could sit in it. I then cut out 3 large pieces of cardboard to make the book covers on each end and the pages in the middle. For the pages, I split the cardboard in half to give the effect of corrugated pages and painted these white. The other pieces of cardboard, I painted with the colors I wanted the books to be. I struggled finding something to stick the cardboard and after using every type of tape and glue I had, I contacted a local upholsterer who gave me some upholstery spray adhesive which worked a treat.

For the book spines, I used the foam from the arms of the old sofa and covered them in wallpaper then painted them and used the spray adhesive to attach them onto the main book part. I then painted my wording onto the book spines with Winnie The Pooh and Matilda after tracing the correct fonts on. I cut out a Matilda picture for the top of the book and also painted the title on to the top of the book.

The worm was made out of microfiber car cloths which I picked up at a pound store. I then tested myself to the limit by sewing it all together (I’m not much use with a sewing machine!). For the tail, I stuffed it with an old cushion and round the hood I put in some elastic so it would sit well around her face.

I made the glasses and hat from cardboard then painted them black. The hole I had cut in the middle was the size of a Bumbo seat which I put in for my baby to sit in. The whole costume was placed on top of a type of cart with a handle attached.

The reaction we got was amazing, the whole town was talking about it and still talking about it at the next contest a year on! She won first place :) The funniest thing was that on her way around the arena she fell asleep, it was so cute and got a lot of laughs! 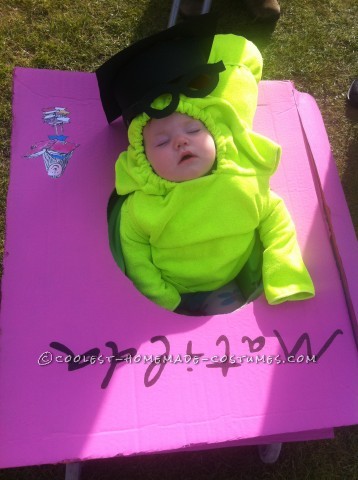