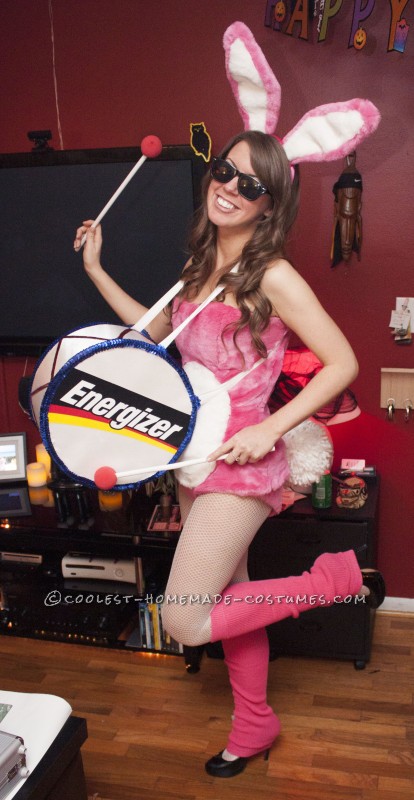 This year I decided to be the Energizer Bunny. My family and I have been fans of the character since the ’80s, and I knew it would be a really fun and less common costume. I usually try to go all out every year, but I’ve never gotten better reactions or had so much fun than with this year’s!

I started off purchasing the pink fur from Etsy. It’s a seal/beaver type of fabric, and it’s super thick and plush – but I admit it was difficult to work with. I used a sewing machine for the majority of it, and it went through fine, despite its thickness. I just needed to use a denim/upholstery needle.

I used a plain white corset as the base to my costume, and I bought a pattern to help with sewing the princess seams on the front. I just used a Simplicity pattern that had the look I wanted, and it was pretty helpful. I am not the most experienced sewer, so creating my own pattern wasn’t a good option for me.

Since the back needed to be laced up, I sewed the fabric all along the sides of the corset, and left a flap open for the laces to be accessed, and secured the flap with white velcro. I didn’t want to look like a bulky bunny, so I spent a lot of time trying on the corset as I went, pinning, sewing, and repeating this until I was happy with how the corset looked once it was laced up.

I should note that from the front, the suit looks like a one piece, and all I did was try on the corset with a pair of underwear, and I just measured how much extra fabric I needed to cover my bottom half. There is a strip of velcro in the crotch area so I didn’t have to unlace everything to use the restroom. Since I wanted the rear fabric to be fitted, I created a removable back end, with the ends attached on the inside with velcro.

The white tummy was sewn directly on top – I didn’t want to mess up any of the precise nips and tucks I made throughout! The fur was purchased online, and it is a seal/beaver fabric that was a similar thickness to the pink fur. I trimmed the pink fur off of the area I was covering so that it didn’t look too bulky.

I created the ears by making my own pattern, and using heavy wire to make sure they stayed perky. When making the ears, make sure to have the wire extend out and run along the headband an inch or so, and then cover the ends with matching ribbon. You don’t want the ears to get floppy as the night goes on!

The tail was created using a very thick chunky cotton yarn. It was intended for baby blankets, but I thought it was perfect for creating a more realistic, plush bunny look.

I purchased a hat box from a fabric store and trimmed the rim of the lid off, so it was flush with the rest of the box. The hat box is really the perfect size, I never felt like it got in the way too much while dancing or squeezing through crowds.

I covered the box with nice white satin, and purchased blue and red sequin trim by the yard. The logo was created by downloading the EPS file from this website: www.brandsoftheworld.com. I opened up the file in Adobe Illustrator, and enlarged the logo to fit my drum.

I glued white ribbon the the sides of the drum and glued the blue trim over it to hide the ends. The ribbons were crossed in the back so that the drum couldn’t slip off easily.

The drum sticks were just a dowel that I painted white, and hot glued foam clown noses to. The sunglasses were under $4 from Amazon. I chose white fishnets for my tights (a matching pink was impossible to find!) and pink leg warmers to finish off the look.

It was so much fun to see everyone’s reaction. I went to a giant Halloween party, and I got dozens of compliments all night. Girls and guys equally gave me props, and it was cool because even though this a glammed-up and sexier version of the classic bunny, it still has an approachable quality to it. It was the perfect blend of sexy and fun! It was such a blast beating the drum to the music and hamming it up all night..all in all it was a great evening, and my favorite costume to date! :o) 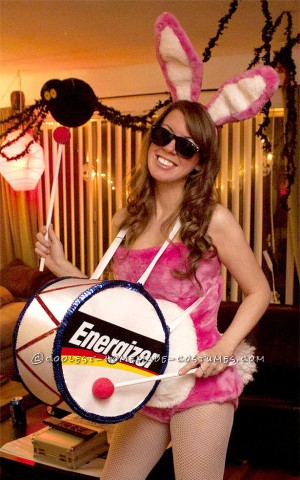 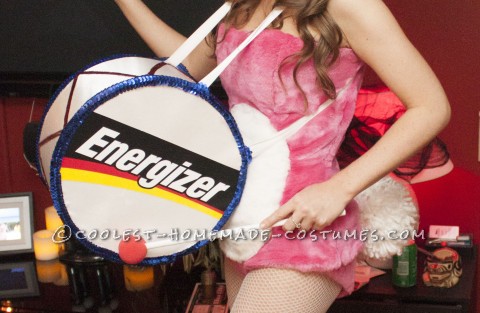