My four-year-old son Joey has a real love for ice cream trucks. He runs to the window with the slightest tinkling of the music outside and just waits for the truck to pass, he watches YouTube videos of all different ice cream trucks – his favorite being Mr. Softee of course, and he literally pretends to be an ice cream man by driving his ride on toy around the house selling ice cream.

I would say a minimum of six hours of the day is spent listening and or singing ice cream truck music. So when my Joey said he wanted to be Mr. Softee for Halloween, I knew I had to make it happen.

The hardest part of this costume was finding the right box. I looked everywhere; Staples, Michaels, AC Moore, Lowes, many websites, and my last resort Home Depot. The boxes were too large, too small, too heavy, or cubes. As I was leaving Home Depot feeling defeated, we passed a light bulb display and I saw our chariot. It was the perfect rectangular prism. The box holding the boxes of light bulbs was the perfect fit. I was willing to pay top dollar for that beast, because I couldn’t stand the look of disappointment in my son’s eyes, but the nice people of Home Depot let us have the box (actually two) for free! Score!

The next stop was Michaels where we bought two cans of white spray paint primer, white paint, white duct tape, an Exacto knife, and the perfect Mr. Softee blue paint. I’m a bit of a math geek so I started to figure of the proportions of an actual Mr. Softee truck and the one I was about to make. I tried to keep the windows and windshield within proportion, as well as the front part of the truck. I then took out my handy Exacto Knife and started creating. I couldn’t find my compass from Geometry class, so I used the circular base of my teakettle to trace for the head and I cut it out.

The box was white but had navy blue writing of the light bulb company’s logo all over it. I originally planned on having to paint the box after priming it, but the two cans of primer covered all of the writing on the entire box. Joey kept asking to help with the costume so I gave him the important job of painting the box, the inside of the box. Now one might think that was unnecessary, but I disagree. It kept him involved and happy and it gave the costume a more finished look.

The blue stripe along the bottom required precision (and painters tape). While that was drying, we worked on the graphics. You literally can find anything on the Internet. It’s amazing how many people post pictures of Mr. Softee trucks. By the way, thank you Internet! My husband took care of finding and cleaning up the graphics. Before taping the graphics on with double sided mounting tape, I had them laminated for a more finished look. All of the edges of the cutouts on the costume (windows, head cut out, windshield) were rough so to protect my baby, I lined the cutout areas with white duct tape.

To attach the front part of the truck, we used Velcro to attach the two boxes, and duct tape along the crease to keep it together. We used mailbox reflectors for the taillights and touch lights for the headlights. People were so impressed that they actually turned on!  To relieve the weight of the box, my husband attached one of his camera straps to the box so that Joey could wear it around his neck and help distribute the weight more evenly.

The wheels were made from black poster board and also attached by double-sided tape. The only thing missing was the music so I downloaded an App, Voice Loop that allowed me to record the Mr. Softee jingle and continually play it. I couldn’t find anywhere to purchase the music so I had to be creative. I then trusted my four year old with my new I Phone 6 by placing it in a running armband and pushed play. Joey was the hit of all Halloween events we went to.

Random strangers took his picture, and probably submitted it to costume contests. He won “Most Original Costume” in a costume contest at a local car show, which our intention of being there was to visit my dad who was showing one of his cars. We had no idea of the costume contest, we just happened to have the costume in the car because the day earlier we had attended a Halloween event at a local high school. The students were the ones who recommended I enter into this contest so here we are! 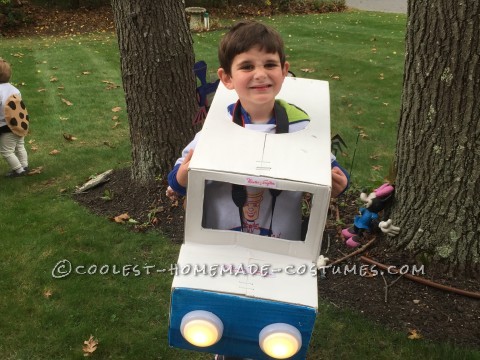 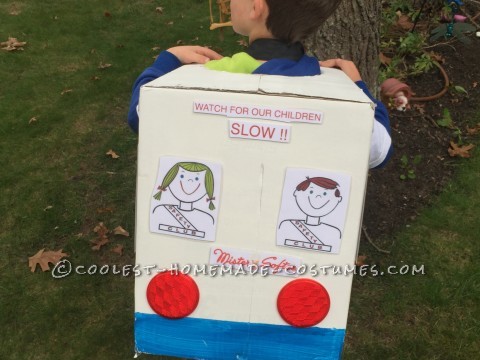 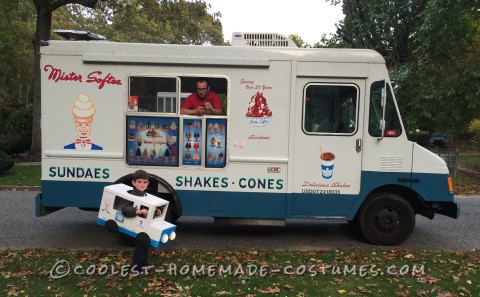 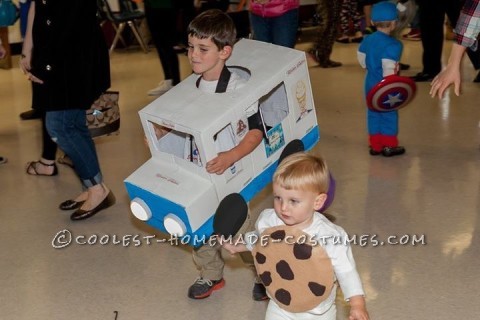 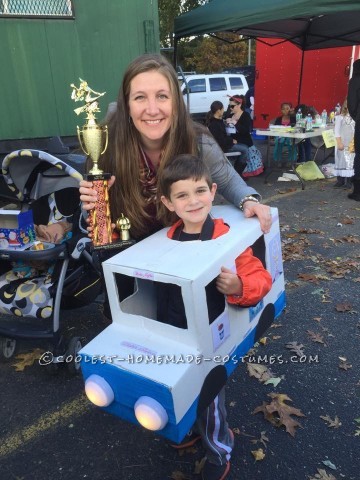