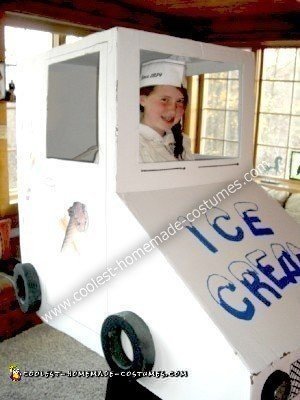 I had this great box to start with but my husband accidentally threw it away, so he bought some large pieces of cardboard and cut out a frame. He then duct taped it together, cut out the windows, and painted it white. Meanwhile, my daughter and I found a lot of photos of ice cream menu products online, which we copied and pasted to a Word document so we could make them as large as we wanted and printed out two copies of each, for each side of the truck.

We bought four floral ring Styrofoam pieces at The Dollar Tree and painted them black for the wheels, which we applied with double stick tape. We drew on the grill and doors, and my husband painted “Ice Cream Truck” on the front and my daughter painted “Caution: Children Crossing” on the back. We even put one of our old license plates on the back! For the lights, we bought four battery operated stick-on lights and added some red light covering for the two back lights. They were applied with double stick tape.

To top it all off, we found some ice cream truck music, which we recorded on an mp3 player and then played through a speaker. She was a hit!