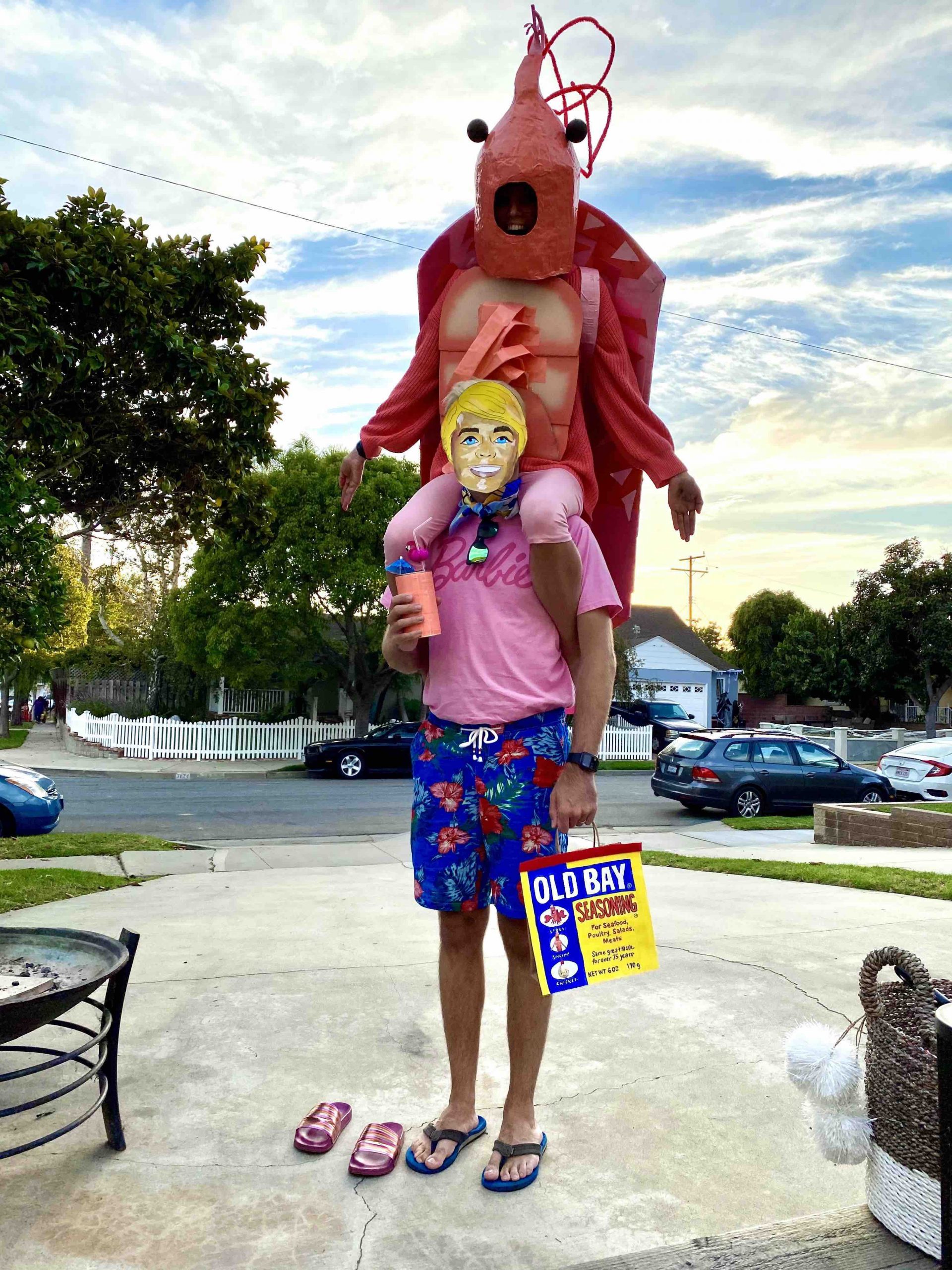 “Put Another Shrimp on the Barbie!”

I always love going as a pun or some clever phrase for Halloween and wasn’t sure what couple costume idea to do for this year. I had seen people wearing a Shrimp hat with a barbie tee shirt before and I thought that was funny, but when my husband and I decided to do a couples costume, I thought it’d be so funny to actually be the shrimp on the Barbie! Fortunately, my husband agreed!

And so (per our photos!) my husband is a Ken Barbie Doll and I am a shrimp! I got on his shoulders and together we were A SHRIMP ON THE BARBIE! What an awesome couple costume idea!

I made the Shrimp costume out of cardboard and decoupage. I had no idea what I was doing, I found one DIY site that had a shrimp costume, but there were no step by step instructions, just pretty pictures, so I was frustrated, but just tried to structure things as I went. I would give you a step by step, but I’m not even sure I could replicate it (maybe that’s why the DIY site was less directive!?). That said, I’ll share everything I DO know (which isn’t much for a first time Shrimper!)

I used light pink and coral spray paint for the coloring of the couple costume idea. I painted little styrofoam balls black to glue on as the eyes, and red extended pipe cleaner for the tentacles. I used duck tape on the front of the costume to make the stringy things on shrimp and the rest (of the front) is strips of cardboard hot glue gunned together. I had to google “how to decoupage” and figure out how to make it (just flour and water! I can’t believe I didn’t remember that from my 6th grade art class!) and built a mold for the head using a balloon, taped cardboard around it, covered it in plastic wrap and decoupaged it. After it dried, WAIT WAIT WAIT for it to dry otherwise it will collapse, I spray painted it.

The back shell is just strips of cardboard (an Amazon box!) glue-gunned together, I just layered each piece upon each other and round off the ends. I spray painted it and layered the inside of the shell with felt and colored paper.

I painted the Old Bay seasoning bag and filled it with cut up red and pink paper to actually be seasoning to be dumped on me, hahaha! I also changed the photos of the crabs, shrimp and chicken on the original Old Bay box to be photos of Sebastian (Little Mermaid), ME (a shrimp!), and Chicken Little!

I painted the Ken face on thick white Paper and taped a headband to the back of it for my husband to wear on his face. I also added the tropical drink (Beach Barbie Ken), by duck taping a can and taping a straw and umbrella in it. The Barbie shirt and Hawaiian shorts are from Amazon!

I could have bought a shrimp costume on Amazon for $49.99, but I decided to make it for $159. Kidding, but the materials do add up, especially if you are getting super detailed. I spent the most on spray paint which averaged $9-$11 a can and I got 4 cans, so that alone made it cost more (now having done it, I think you only need 2 cans), and colored duck tape is $6 a roll, I got 2 rolls. So that makes it more than buying it, but everything else I already had, cardboard boxes, newspaper, etc…

Also my husband made me walk through Target like that!

A few people in Target seemed afraid, fair enough, large shrimp coming through! But most people where ever we went loved guessing what we were, and seeing their reactions to realizing it was “a shrimp on the barbie” was priceless. I love making people laugh (especially in 2020, I think we need it!), and this costume got some good ones!

While I am an artist, I’m not typically a D.I.Y.er, so this gave me a lot of respect for people who create so many things out of practically nothing.

Thanks to those who helped get my wheels turning to attempt something myself, it’s opened me up to trying a lot more creatively! I hope you enjoy our couple costume idea.