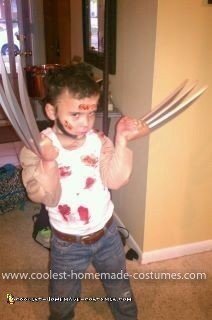 My son didn’t want the regular cartoon Wolverine costume, he wanted the Hugh Jackman “logan” look. We grew the hair out for about 3 months prior to Halloween so we could spike and blow dry it up. We also colored it black for the special look. Makeup was used for the beard and fake wounds were used with liquid latex to stick on. The muscle shirt was purchased online and the wife beaters we had around the house. The belt and the jeans were also items we already owned. The wolverine claws were a toy he used all the time! We ripped up the shirt, putsome wounds on his arms with some vampire blood and had an amazing logan look!

He got the “winning” from every house we went to for his Homemade Wolverine Costume! Also was told he had the coolest costume they have ever seen a kid wear!