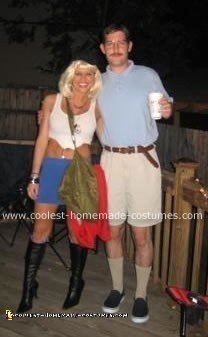 I wanted to bring back Vivian, Julia Roberts’ character from the classic Pretty Woman! I went with the blue short skirt and white tank with the attached ring along with the classic short blond wig, black hat, black tall boots with condoms hanging out of them, her classic shoulder bag and the red jacket hanging over it!

I pretty much covered every aspect along with the bracelets and I even had necklaces, one which spelled out Vivian in blocks with letters! Red lipstick topped off the attire and everyone called me Julia or Vivian all night long!

It was definitely the biggest hit for the girls’ costume this year at the party I attended! It was not too hard to put together with the rings in front and back for the dress part of the outfit once I found the blue skirt. The white tank was easy to find and then the boots and wig and hat along with the purse and jacket just made the outfit!

I don’t think there is one person who can look at my outfit and not know who I was! One thing that I did do to add on to the costume was chewing the bubble gum that Julia Roberts did during the movie! Handing out the condoms made it even funnier to most of the other people at the party because I was playing the character perfectly. It was a classic movie and this was a classic costume for one of the most classic characters of all times!