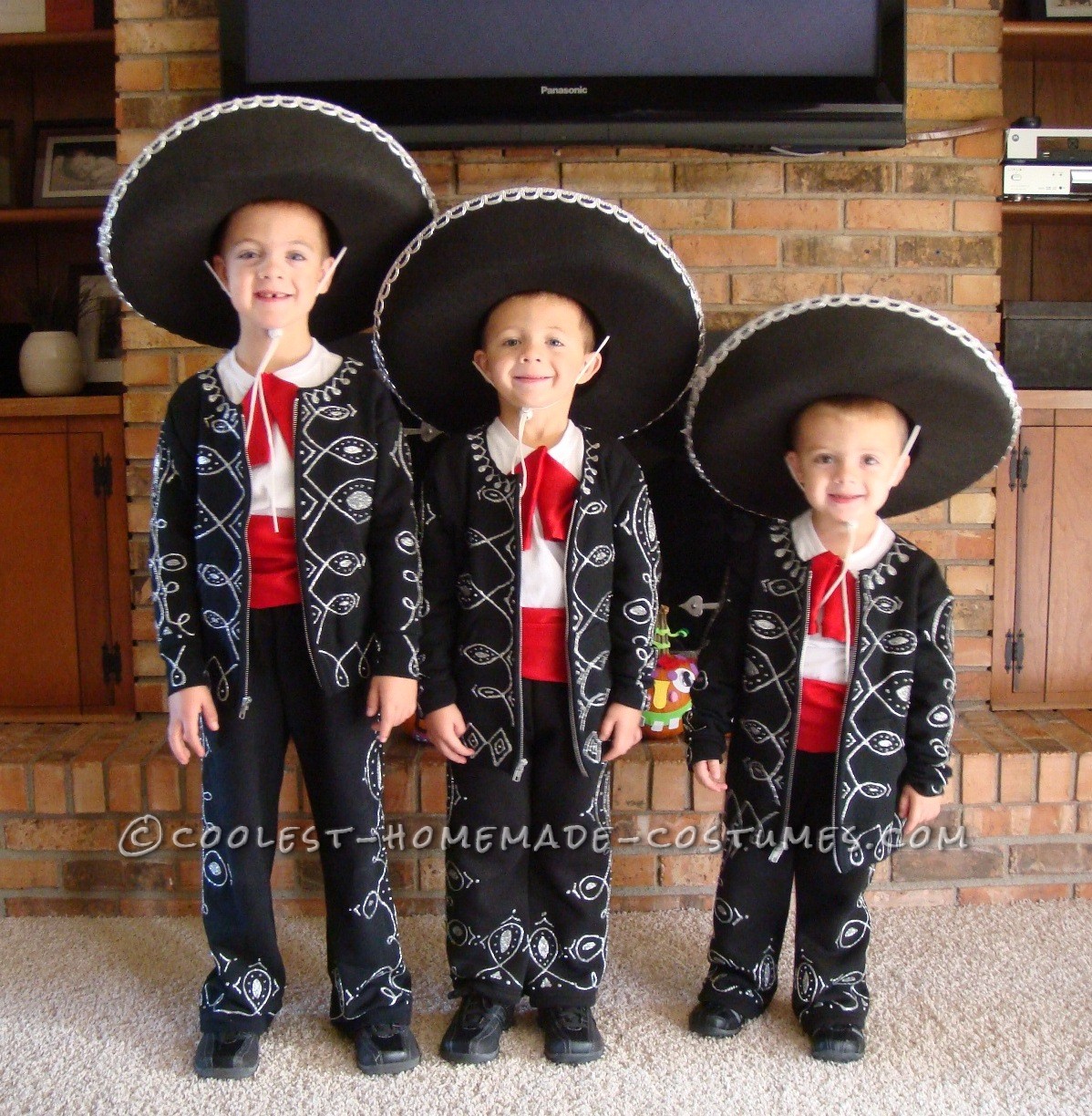 We have three little boys who are super good buddies and also very silly and funny. We tried to think of Halloween costumes that they could wear as a group and that also fit their personalities. What better costumes for our silly boys than the Three Amigos!! While the boys didn’t appreciate the humor of the movie quite as much as we did, they did enjoy the bar scene when the Amigos were singing “My Little Buttercup”.

I started the costumes by buying cheap, black sweats and zipper sweatshirts and lots, I mean LOTS, of silver glitter glue. I cut the hoods off of the sweatshirts, and laid the sweat suits out flat on the kitchen table. Then I went to town with the glitter glue. I did loops, swirls, dots and zigzags of the silver glitter glue down the sides of the pants, down the sleeves of the sweatshirts, and on either side of the sweatshirt zippers. This took several days (which seemed like months) as I would do one side of the costume, let it dry overnight, then flip it over and do the other side. And, as you can tell by the picture, there’s no rhyme or reason to the pattern or design. The gaudier the better!

The boys all wore white t-shirts under their sweatshirts, and I bought some shiny, red fabric for the ties and cummerbunds. I don’t know how to sew, so we folded the red fabric for the cummerbund and tied it in a knot around each boy’s waist. The tie is made of two pieces of fabric, both folded sort-of like a dinner napkin and then held together with a safety pin. And I attached the tie to the white t-shirt with another safety pin and some double-sided tape to prevent it from flopping around. (Very cutting-edge, I know.)

We purchased the black sombreros at the seasonal Halloween store, and I used super glue to glue on the silver trim. The boys also wore their black gun holsters with their toy silver pistols. (I think when this picture was taken, one brother had pretended to shoot another other brother in the eye, so the pistols and holsters were removed. Ahhhh…boys.) And WHAL-LA, you have adorable Three Amigos costumes!!

We received loads and loads of laughs and compliments, a few blank stares, and a few questions as to why we dressed our boys as a Mariachi band.