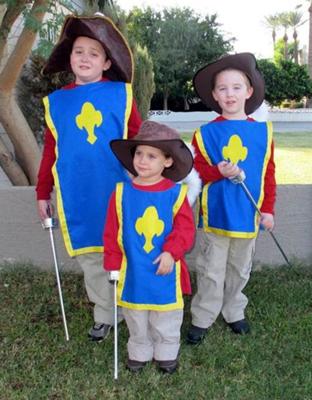 Our boys wanted to be The Three Musketeers (like the ones from the Mickey Mouse cartoon version) for their 2011 school Halloween party.  We started with red long-sleeved t-shirts and light-colored pants they already had.

To make the tunics, I took one yard of blue lightweight cotton fabric and cut big rectangles long enough to cover them front to back and wide enough to just hit their shoulders.  Then I cut a slit in the middle for their heads to fit through.

I took the yellow ribbon and sewed it around the edge of the entire rectangle.  Then I hand-drew a fleur de lis (like the one from the cartoon) and traced it onto yellow felt.  I cut each one out and glued it to the front of the tunic with fabric glue.

My husband made their swords out of dowel rods, wrapped in silver foil (not gray) duct tape.  He cut a plastic red party cup in half, cut a hole in the bottom, put the dowel through the hole, and taped the cup and dowel together, leaving enough dowel at the top for them to hold.  Then he wrapped the part they held with black duct tape.  This way, they got their swords but they 1) weren’t sharp and 2) were resilient enough to be played with but not break.  Genius!

I made them each a belt out of brown fabric with a loop sewn in to hold their swords.  You could probably just use a brown belt you already had and sew/attach a loop separately.

For their gloves, I simply traced around their hands onto lightweight white fabric and cut them out a little bigger than the traced line.  Then I sewed the gloves together.  They were light enough not to bug them all night.

We had to buy pirate hats at a store for them and I cut one white feather boa into thirds for their hat feathers.  I folded the sections in half, wrapped the cut ends together with tape (to reduce feather loss) and tucked the taped end into the band of their hats.  Then I lifted one side and pinned it up to complete the look.

The boys absolutely LOVED their costumes and were a hit at the school party! 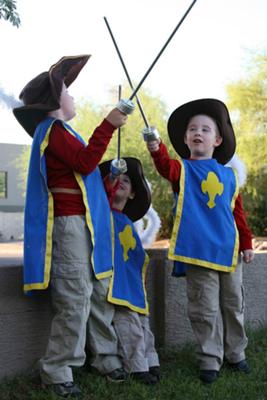 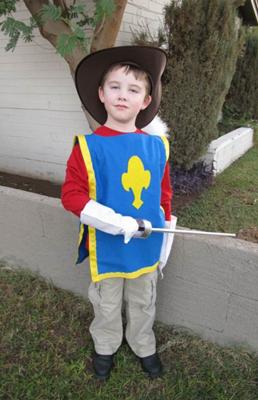 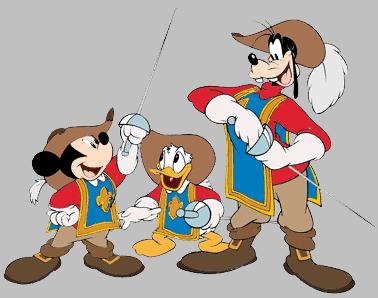