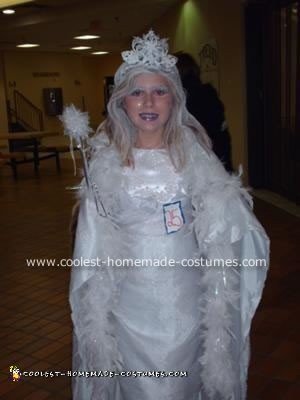 This Snow Queen costume is totally handmade without any sewing at all. It started with a dress that was too small, so I wrapped two layers of fabric around the bottom. One is lining, the other is sheer organza-type fabric.

I made a cape just cutting the same two types of fabric into a big rectangle, and hot gluing them together. Then I hot glued snowflakes (bought at a dollar store) and glued icicles onto the bottom of the cape (the icicles were icicle garland in a Christmas section). I then hot glued a feather boa around the top.

The crown was originally a purple dollar store crown that I ripped apart and hot-glued crystals, snowflakes of different sizes and then fake snow (in a can). The wand was a star that I hot glued feathers, snowflakes, and fake snow also. Hair was spray painted white and blue, and added fake snow while wet to achieve a very real crystallized look.

I spray painted the shoes white, added sparkles and fake snow to them also. I added a touch of white makeup, with silver to the face, fake eyelashes, and blue eye shadow and lipstick.

For the necklace and bracelet, I bought icicle garland and wrapped around for the necklace, and snowflake garland, too. The bracelet was a cheap wire dollar store one, that I added snowflakes and fake snow, glitter to.

I painted the fingernails blue and white to give a full effect, and icicle earrings made out of icicles glued to cheap earrings. (They are not shown in picture). White pantyhose under the outfit.