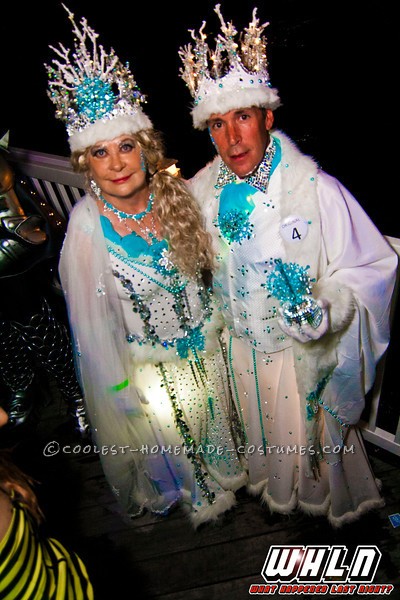 These Sparkling Snow Queen and Her King costumes were created out of white banquet table cloths.I will start at the top. The crowns were the simple gold crowns sold in all party stores. We painted the crowns white, added fur trim to the rim and almost covered the crown with 1′ mirror squares (for extreme sparkle). To get that frozen forest look I hot glued flocked branches to all the points of the crown. To turn it up a notch I added a set of battery micro led lights to make the crown glow.

The queens over the top cape was originally the train of a wedding gown found at Good will. The train is all tulle that we covered with translucent snowflakes with ice cycles dripping off the edge. The queen’s dress was made from a white sun dress and table cloths. First we took an old pair of white shorts and safety pinned 2- 72′ round table cloths to the waist. It is easier to do this while the shorts are on to get proper length. This will create a lush full gown. We then trimmed the bottom edge with white fur and covered it with some of the 2000 one inch mirrors that covered these costumes.

To make the top of the gown we took an old white sun dress and put it on over the piece we  made out of the shorts. This gave a ballroom gown look. We trimmed this edge with the fur as well and used about 500 mirrors to cover dress. The top was decorated with the white fur and ice blue tulle, 4 large strands of beads were strung across the chest for that Victorian look. All the ends of the gowns had ice cycles as well as the beads across the chest. The entire queens outfit was also lit with led lights.

The kings robe is a 72′ round table cloth that we cut it up the middle threw over my shoulders wrapped it over my arms and had a kings robe. All the edges were trimmed with white fur and the area around the wrists was pinned  together to create a sleeve. The robe was covered with mirrors and trimmed with ice cycles. The kings shirt is a tuxedo shirt that has the collar covered with mirrors. The shirt has an ice blue ascot that is kept in place with a snow flake pin. The white vest was also covered in mirrors. The kings skirt was made the same way as the queen except we used a pair of white pants and decorated the same. The king was also lit up with the led lights. These costumes had 7 battery packs each.

Hope you enjoyed the costume and try to make your own!