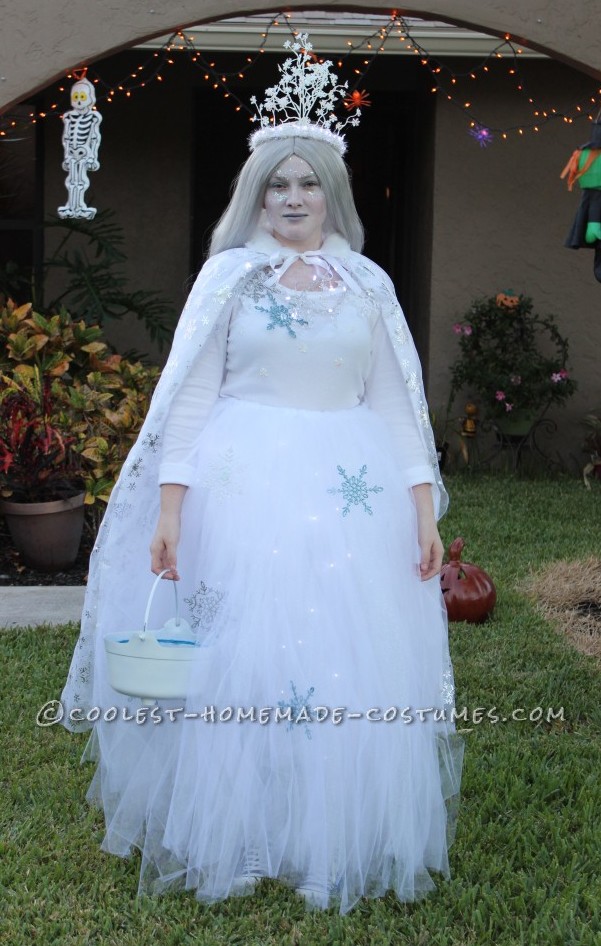 For years now I’ve been wanting a Snow Queen costume for Halloween (because I’m a winter-born baby and in sunny South Florida we don’t get any snow!). I knew I would have to make the costume for it to be even halfway good, but I never had enough time to do it and eventually went as something else. I thought this year would be a great year to finally make the costume since the Disney movie “Frozen” came out fairly recently and it was a popular theme. I made sure to plan ahead this time, buying all of the fabric and accessories I would need and ordering all of my battery-operated lights in advance (because I wanted to be a Snow Queen that glowed!). Here is a breakdown of the costume’s construction:

I bought a mixture of white and glitter rolls of tulle fabric. I measured the length I wanted the skirt to be (from my waist to the floor) and then doubled that measurement for the strips of tulle. I cut strips of the tulle using the doubled measurement, gathered two strips at a time, and tied them to an elastic band that had already been pre-measured and pre-sewn earlier. Once the band was completely covered, I trimmed the skirt a bit at the bottom so all the strips were even and then glued sparkly snowflakes all over the skirt.

The shirt was just a regular white long-sleeved t-shirt. I glued a few of the same snowflakes on the shirt that I used on the skirt.

The crown was a plain, round, fabric crown base found at a craft store. I wrapped the crown with a strip of white feathery-like ribbon from Joann’s and I used a few pieces of snowflake branches I found at Michael’s for the crown’s top. The base was wrapped with a a battery-operated light strand that looked like little ice crystals.

The cape consisted of white glittery fabric and see-through fabric with a snowflake design from Joann’s (I used the white fabric so the snowflake fabric’s design would show up better). I layered the two fabrics, cut out the length I needed, and sewed the sides together. The top of the cape where it would tie up, I folded under a bit and sewed to create a pocket for the ribbon. I threaded some white ribbon through the pocket and then used a strip of faux white fur over the outside of the neck area as a collar to complete the wintery look.

I wore white leggings underneath the skirt (because the skirt is too see-through, so leggings are necessary), a white/gray wig for my hair, and I also purchased an ICE FX kit for my makeup which came with several types of ice crystals that would add to my “cold” look (which I used around my eyebrows and cheeks). The rest of my makeup consisted of white face paint and some blue paint which I added around the areas I glued the crystals on, my eyes, and my lips. My trick-or-treat pail was simply a black plastic cauldron from the store that I spray painted white. Inside the cauldron I hot glued a blue neon battery operated light strand around the rim so it would glow at night.

Halloween night, I wrapped a battery operated light strand (which had hanging “icicle” type lights on it) around my waist before I put the skirt on and attached the battery pack to my back using medical tape. Then I put the skirt on over the lights, fluffed out the skirt a bit, and adjusted the “icicles” so they hung evenly underneath the skirt. Another strand of lights that looked like ice chunks hung around my neck like a necklace to light up my shirt, and the battery pack for that was shoved into the front of my bra. The battery pack for the lights around my crown was shoved into the back of my bra. In total, there were four battery operated lights: the one under the skirt, the one wrapped around my neck, the one wrapped around the crown, and the one glued inside the cauldron.

This is probably the best costume I’ve ever worn or created. It was also the most expensive too, but the result was well worth it. I got stopped so many times by people who asked to take pictures with me, and at one point I had a crowd around me of people wanting to take pictures and pose with me as I was leaving someone’s driveway (this lasted for about 10 minutes before I finally managed to get away!). I received many, many, compliments throughout the night from adults, teens, and little kids. Several people mentioned that I was so bright they were able to see me coming all the way from the opposite end of the street. Many asked where I had bought the costume and were shocked to know that I had made the whole thing. Many also claimed that I was the “winning costume of the night!” One family started singing “Baby, it’s Cold Outside” as I walked up and another group sang the song “Let it Go” from Frozen behind me as we were walking. Clearly, this costume was a major hit, so I’m excited to have finally gotten the chance to make it and wear it! :) 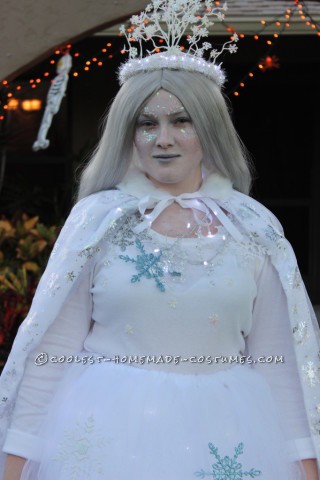 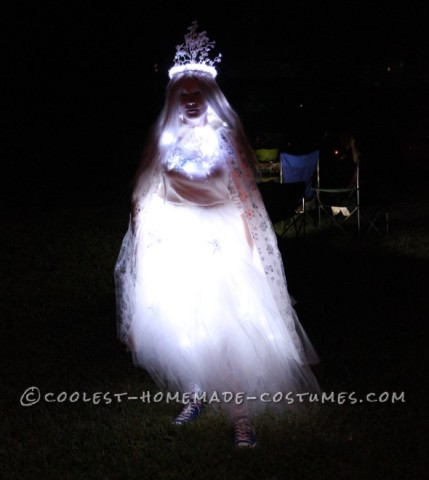