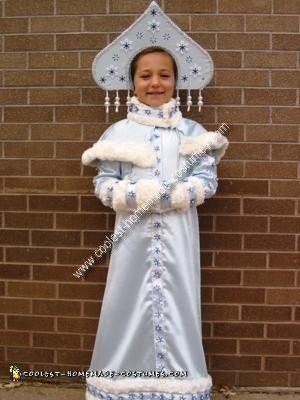 The dress of the costume is just a simple trapezoid shape pieces for front and back which I cut according to my daughter’s size. I did not use a store bought sewing pattern for it. The shoulder top piece is just a half circle pattern.

I used snowflakes from Michael’s to decorate the dress, and that was the most time consuming part of the process, since I sewed each snowflake by hand. I guess I could have used super glue to glue it on. The head piece is just a cardboard cut to shape and covered with the same fabric (glued) as the dress and snowflakes glued to it.

I also made an extra thing – fur muff hands warmer – cylinder shaped with silver rope which allows the piece to hang if not used.

Unfortunately I did not think ahead and did not make photos of this process. It took me about 24-30 hours to make this homemade Snegurochka Russian Snow Maiden costume, total cost about $20.

You can read more about Snegurochka – The Russion Snow Maiden here… 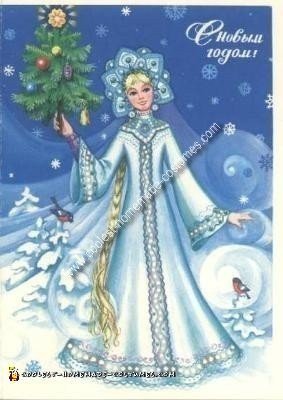