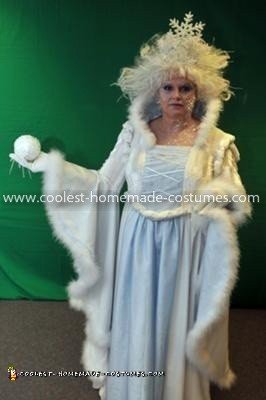 I got the Snow Queen Costume idea from the movie Chronicles of Narnia. I didn’t go for looking like the Queen in the movie. I came up with an idea of what a Snow Queen would look like to me.

I made the dress using a McCalls pattern. The fabric I used was some old white cotton sheets and some thin shinny material I found on sale for $5.00 a bolt. I’ve actually been putting together the idea for a couple of years and I purchase items after Christmas that were 50%-75% off.

I used three snowflake ornaments and attached them to a child’s crown with wire and hot glue. I cut ice icicle ornaments to different lengths and hot glued them to the fingers of a pair of white gloves. I put Christmas wire with glitter in a white wig and used spray glue to make the wig stick out and stay out.

Makeup was a mixture of my regular makeup and white costume makeup. Instead of blush I used blue eye shadow. Using a glue stick I glued rhinestones on my eye brows and used some false lashes with silver glitter on them. My eyes were lined with blue liquid liner and eye shadow was white and blue shimmer. Under my eyes and above my cheeks I put some white and grey eye shadow. Blue shadow was used on my lips then a lip gloss.

Stick glue was placed on one cheek and down my neck and part of my chest. Snow that is used for Christmas snow villages was used on top of the stick glue for a frozen look. A white Christmas ball was used to look like a snowball in one hand while the fake snow was used in the other hand so I could blow snow at people. 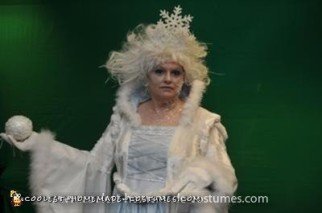 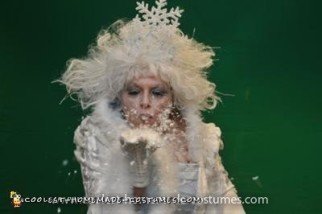