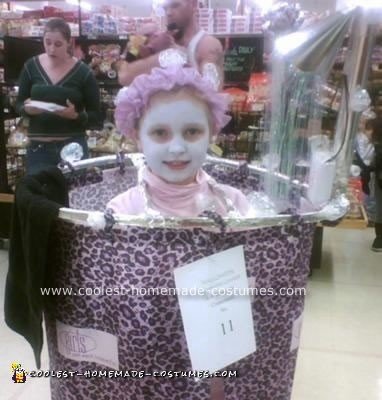 First we wrapped the hoop with air-duct tape(u can use duck tape too), attached the paper tube, covered it with the tape and added a funnel shape cone (we found silver paper at the craft store that worked perfect!) and then taped the clear tinsel around the inside for the “water”.

We made the 2 straps to hold it on with the tape also. With the shower curtain we cut and hemmed it, hung it on the hoop, make sure the opening is in the front so she could trick-or-treat in it. Then just added the accessories. She carried the bath brush, we attached the towel over the “shower rail”, used the saran wrap for bubbles and attached them all over,and painted the soap box, wrote “SOAP ON A ROPE” on it and attached it to the shower head with string.

She won lots of costume contest and had lots of fun-getting “Caught in the Shower”!

Cute Lady in the Shower Costume