Our family tends to go a little over the top when it comes to Halloween. It being our dad’s favorite holiday, the only problem ever comes when deciding how to top the previous year. Well, this year, we found a way to leave all of the years past in the dirt.

How we made the Homemade Puppet Master and Puppet Couple Costume:

The Puppet:
Costume- The puppet was fairly simple. We raided GoodWill (and mom’s closet). You’d be surprised how many brightly colored-sequin covered spandex leotards/jumpsuits we found (and all for under about $6). When it comes to the puppet, you can really get creative with what they wear. Bright colors are definitely a plus, but you could really do ANYTHING. China doll, baby doll, animal, YOU NAME IT! We tried to hide as much skin as possible to make it look more real, so we used gloves to cover the hands and just stockings to cover the legs. The tutu actually came from an old ballet outfit. Lastly, to finish the look, we gave the puppet a derby hat.
Make-up- True to halloween, we used the silly cream paints you can get ANYWHERE this time of year. I really wanted to stick to the colors we had chosen, so I just used white paint on my entire face and then black and red to follow the harlequin puppet look. The makeup can be done however YOU would like.
Hair- I pulled my hair up in high pigtail buns and put red ribbons in. Again, you can do whatever you want or even wear a wig if you’d prefer.

The Puppet Master:
Costume- The puppet master was a little bit trickier than the puppet. The hardest part of this whole costume was learning how to walk on stilts. Please note: this is not NECESSARY for the costume, but it definetly made the costume stand out (literally). A way to modify this costume so you DON’T have to use stilts would be to just use a tall parent and a child, or platform shoes. (Use your imagination!) The top part of the costume is really easy. We gave her one of my dad’s suit jackets and white button up shirt and then just used a black ribbon for the neck tie. Then we finished off the look with a top hat. The pants, however, were tough. We tried finding pants long enough to cover the stilts, but of course to no avail. What we did was take an old king sized sheet and did a rough sewing job. (as you can tell from the other picture, we’re no seamstresses) Looking at the “pants” after we had sewn them, we thought we were doomed. They looked awful. But for some reason, when they were put on above the stilts, they were PERFECT! The extra room gave a little bit of illusion and wiggle room and with the jacket hanging down over the top of them, no one knew that they weren’t real pants.
Make-up-The only makeup we used on the puppet master was a silly handlebar mustache held on with spirit gum. It gave it just a little bit of humor considering the puppet master was a girl.

How we tied the two costumes together:
The thing that ties these two characters together is of course, the “controls”. These were actually the easiest part to make. We took an old TV tray and cut the legs off. The legs were already screwed together, so this worked flawlessly. We drilled holes in the ends and tied in rope which then were tied to the puppet’s wrists, ankles and pigtails. You could easily make this same effect with a few 2 by 4’s and some nails. Together this costume stood a little over 15 feet tall.

My favorite part of the night was when the puppet “came to life”, grabbed the controls and made a break for it! She ran through town and would stop, turn around, point and silently laugh as the giant puppet master ran after her screaming “stop that puppet”! Our costume definitely grabbed everyone’s attention and was the talk of the party. Luckily, the party was outside otherwise I don’t know how we’d have pulled it off. I know it’s a little bit of work, but trust me, this costume is DEFINITELY worth it. Now there’s only one problem, how do we top this NEXT year? Hmmm.. Maybe this website has some ideas. 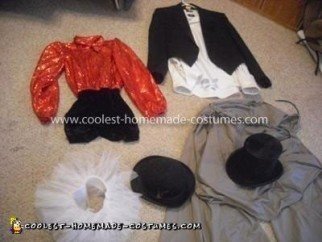 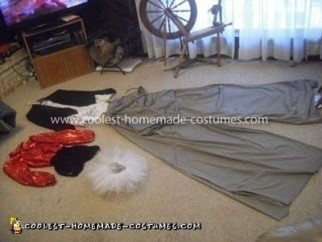 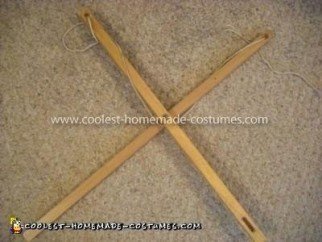