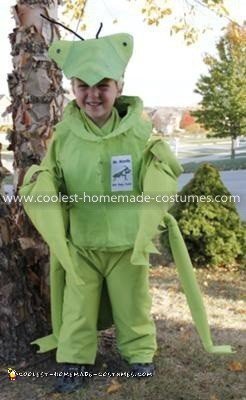 I made this Homemade Praying Mantis Costume for my 4 year old son and he couldn’t have been more pleased! For the head, I started with some wire screen and molded it with 2 tennis balls around a baseball hat. I secured it all down with painters tape, painted it with craft paint, and attached two pipe cleaners as antenna.

The thorax is made with the same wire mesh, molded into a vest, and then covered with paper mache. After drying, I painted it the same color as the head and attached a “name tag” that read “Mr. Mantis, Eat. Prey. Yum.” so that neighbors would know he was a mantis and not a grasshopper or other green insect.

My friend donated some green fabric she no longer needed, and I sewed pants and a modified cape with an abdomen, which I stuffed with the stuffing from an old pillow. At the end of the arms, I sewed on the “pinchers” and stuffed them with the same stuffing from the pillow, leaving an opening for his little hands so he could still gather Halloween treats.

As you know, insects have six legs, so I sewed two fabric tubes and filled them with two empty wrapping paper rolls. I bent them and gathered the fabric at the joint and punched two holes in the top end to thread with fabric scraps and attach to the vest. 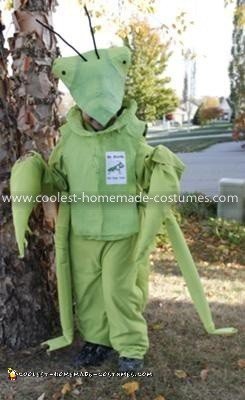 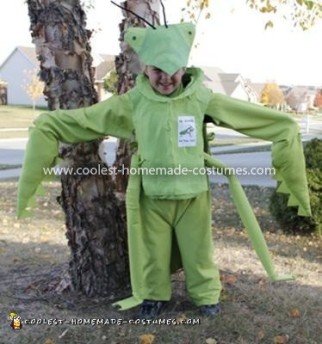 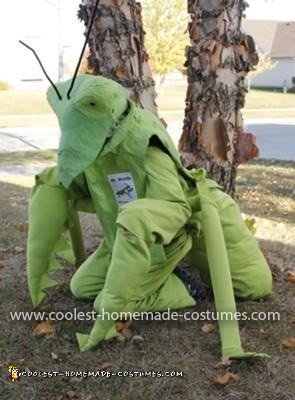