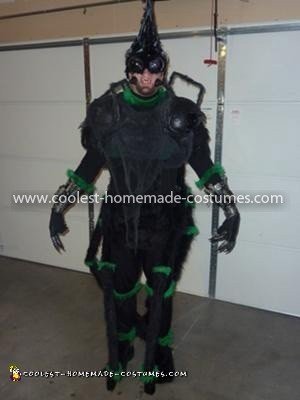 This year’s costume had to be comparable to last year’s Oscar the Grouch costume. I wanted something that was both mechanical, and unique. I decided to create a half-man / half-spider designed similar to a Centaur (upper half is man, while the lower half is animal).

The materials were relatively inexpensive, but the time investment was major. Not only did I want to build six extra legs, but I wanted them to move in a circular motion. I am not an engineer by any stretch, but I have a basic understanding of how things work. I had a rough design in my head, and was able to accomplish this costume by doing the following…

Spider Legs:
I first designed the base (the spider abdomen) out of 1 inch PVC pipe and fittings. The idea was to assemble two crankshafts (similar to bicycle pedals). Each crankshaft would control one leg on each side of the rig. I had to find two identical bicycle gears (containing the same number of teeth) so that I could synchronize the leg movement without hitting each other.

The synchronization took a long time, and there were hundreds of adjustments made to not only make sure it moved properly, but also to make sure it wouldn’t fail half way through the evening. After the abdomen was built, I bought a $20 cordless drill, and mounted it to the PVC rig.

Lucky for me, when I opened the drill up to remove the trigger and battery, not only was the trigger mechanism completely contained, but it only had two wires controlling the variable speed motor. I cut and wired an extension cord to the trigger so that I could put it in the inside of my right glove. I later wired an extension for the battery to sit behind me, just above the abdomen.

Next, I attached a backpacking frame to the PVC rig (abdomen) so that it would wear more comfortably. With the frame, the whole rig weighed about 30lbs. I sprayed the PVC black for aesthetics, and then I layered the entire thing in fur. I had green fur left over from Oscar the Grouch, so I lined it with green accents. The abdomen was formed out of chicken wire, and was lined with cardboard to make sure that none of the gears grabbed any of that fur.

Shoulders:
I bought a used set of hockey pads, sprayed them black, and glued sever layers of mesh netting that I bought on sale.

Spider Eyes:
I bought some acrylic bulbs from a craft store. I carefully sawed each bulb in half and hot-glued two eyes to each side of a set of buggy looking sunglasses that my wife has not yet noticed are missing. I added fur to the outside to hide the glued spots, but also to make them look completely black from the outside.

Hair:
While I wish I could say that I created EVERY part of this costume, I found a wig online that worked perfectly for the costume, so that was one part that I didn’t build.

Summary:
In summary, this Homemade Man Spider Costume was over two months of work, but it was a lot of fun. There were at least three times where I wanted to quit, but after taking a break from it, I was able to finish. I was allowed unbridled creativity this year. Special thanks to my folks for helping me with the supplies and support for this project, and of course my family who allowed/helped me to create this monster.

Here’s “The Making Of” Video: 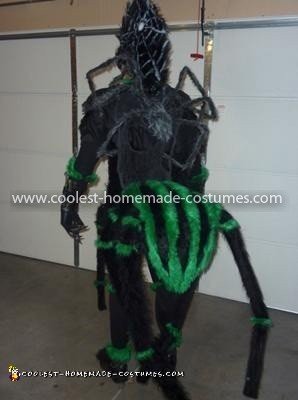 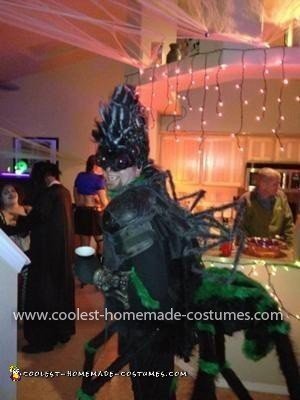 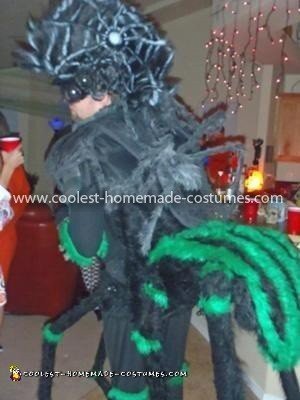