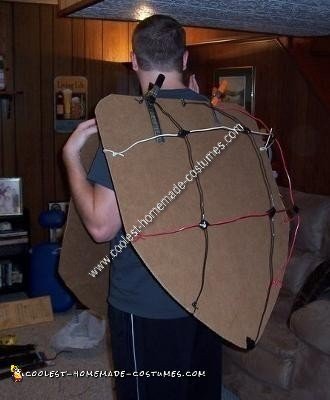 I’m not sure if anyone else experienced the massive stink-bug infestation us Pittsburghers experienced, but if nothing else, stink-bugs gave us a great idea for a Halloween costume!

My boyfriend, Josh, and I hate stink-bugs but after some thought, he came to me with the idea to make him one for Halloween! We spent a lot of brainstorming time just trying to figure out how in the world we would construct this costume but after a week or so, I think we came up with a Homemade Stink Bug Halloween Costume Idea.

First, we started out with a trip to the craft store and Josh found some amazing camouflage colored fabric that we could use. We bought about 3 yards. Next, we took 2 large pieces of cardboard/posterboard to use as the bug’s abdomen and shell piece. We cut them in that weird, almost hexagonal like shape that stink-bugs have. Now, the abdomen was really easy to make because we just took the fabric and wrapped it around the piece of cardboard and then secured it with some hot glue and duct tape (miracle tools to any homemade costume maker!) To make some buggy legs to connect to the abdomen, all we did was cut the left over scraps of cardboard into 4 strips, bent them a little and glued them to the front. I used a sharpie marker and added a little shading to them so it looked like the legs had little joints.

Creating the shell was a TAD more difficult. We didn’t want the shell to be just a flat piece nothing hanging on Josh’s back so we decided to make some sort of skeleton frame from copper wires so it had a 3D effect. We poked wire on the left side of the board and arched it over to the right side so it eventually made a nice little frame of a shell that we could then lay the fabric over it. After tying about 10 wires to the cardboard, we used some duct tape to reinforce the frame and laid the camouflage fabric over the frame and secured on the other side of the cardboard with more hot glue & duct tape.

After the shell, we connected the front abdomen piece and the back shell piece together by cutting an old leather belt in half and making shoulder straps so that Josh could just wear the cardboard bug body like a pitcher’s pads.

For the headpiece, Josh wore an fleece snow mask we got from Wal-Mart and wore his old swimmer’s goggles to create his bug-eyes. To make the costume a little humorous, I made him bouncy antennas from fuzzy pipe-cleaners wound around a headband I had.

To pull the costume together, Josh wore a brown thermal under his stink bug shell & black pants. (We thought it would look funnier if he wore brown or green tights on his legs but we ran out of time!)

When Josh showed up to our friend’s party, everyone immediately knew what he was since our town has been battling stink-bugs all summer!! We got a lot of funny pictures of the Stink-Bug hiding in its usual hang-out spots..such as on the shed and on the door to the house. Josh thought it was great to rub up next to people with his fake cardboard bug legs but didn’t think it was too great when he couldn’t fit inside the doorway to the house to get another drink! 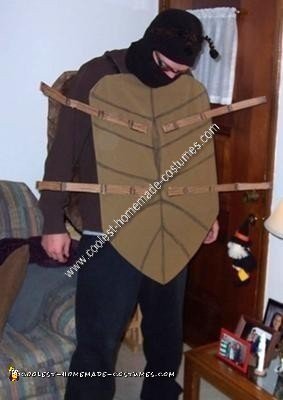 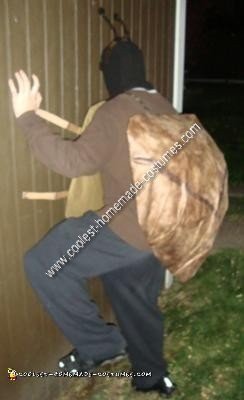 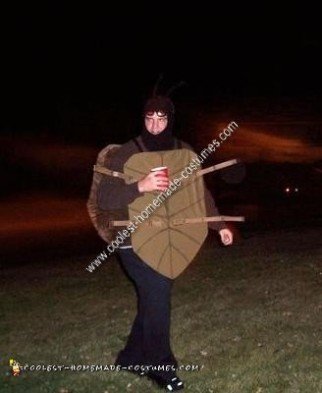