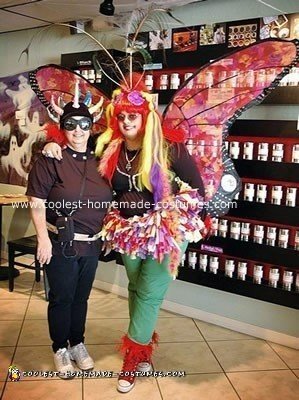 This is our Homemade Butterfly and Alien Costumes. My mom was an alien, a simple and fast costume:

black tee shirt and pants.
goofy horned hat.
goofier sunglasses.
a light up belt made of silver vinyl ribbon from the craft store and battery operated rice lights poked through from the back. It was clipped together with a binder clip! A collar made out of a light-up Halloween necklace.

Super simple. Super Cheap. The hat was the most expensive (and HOT) part at $25. I guess she should have worn black shoes!

My butterfly costume was on its 4th re-do and won my 4th first place in this contest. It’s since been retired.

THE LIST
I used acoustic ceiling wire from Home Depot to make the wings, its better than coat hanger and takes more twisting and bending. The cost was about $5. Use pliers to make the bends, I used 2 sets.

To attach the wings, I bought a cheap but tough plastic plate from Big Lots, its a softer plate that takes well to melting without cracking, plastic, not melamine. My plate was square, with rounded edges, but I don’t think it matters what shape you use but make sure its dinner plate size for adults, its going to be the stabilizer for the wings. It was $2 in the picnic section.

There were also 2 big bags of sequins, the biggest size sequins you can get, half inch I think. They cost around $3 each bag.

Fur. I used an old rabbit pelt, but you can use fun-fur. It had to be a piece big enough to cover the whole plate, say half a yard?

A pretty “butterfly-ish” material. Mine was a closeout polyester (I think) gauzy-crinkled, semi-transparent stuff. I bought the last of the bolt, I guess about 5 yards.

Step 1
I burned 2 pairs of pencil thick holes into the plate to attach the wires, one pair of holes for each wing, over and under- otherwise one hole on top of the other, like a colon (:), spaced about 2 inches apart. The pairs are then spaced about 6 inches apart from each other. Between the 2 pairs of holes I cut 2 slots from top to bottom that were about 2 inches long and about one inch from the inside of the holes. What you will end up with is 2 holes, one on top of the other, a slot, another slot, and 2 more holes like this-> (: | | :) Just space everything evenly and center it.
I used a soldering gun to melt (cut) the plastic.

Step 2
IMPORTANT NOTE: Make sure when doing this step that the wings come out of the BOTTOM of the plate so that the concave side faces your back!
The wire I used is used to hang drop ceilings and I got it at Home Depot really cheap. Its tough but doesn’t break like coat hanger and is much more flexible. The pieces I used were full length, which I think was 12 feet long. The total wingspan is around 6-7 feet. The wire is poked from the front through top hole to the back then bent back through to the front through the bottom hole, leaving a 8-10 inch tail on the bottom. You then form a big loop which you will make the wing shape out of and go back through the plate in reverse of the first step, through from the front BOTTOM hole and from the back to the front TOP hole leaving a 8-10 inch tail again. Then using a couple of pliers I twisted the tails together firmly a couple of turns, then wrapping the ends around the wire loop where it comes out of the plate- top and bottom, careful to tuck the pokey ends in tight. It should look like a spring on each end of the big loop, real close to the plate. You can use duct tape to secure the ends so they don’t separate. It also helps to keep the ends from poking through the finished product.

Step 3
I used a black front closure sports bra to support the frame. I wove it through the slots that I cut. Weave it through the slots so that the bra is on the opposite side of the plate from the wings. Afterwords I embellished it with some sequined ribbon. After a couple of years of use, the elastic in the shoulder straps started to stretch and the wings sagged, so I tacked them to the fur wrap (step 8). Maybe try putting a couple more holes at the top and attaching the shoulder straps to the holes with a couple of big buttons sewn on the opposite side of the plate? It just depends on the fit for you.

Step 4
At this point, I laid the rig out on the floor and bent the wires into butterfly shapes, kind of like a monarch. The hardest part of this step is making the sides match…don’t worry, no matter how hard you try, they won’t match. LOL. I had purchased a really pretty red, pink and yellow splotched gauzy material, it was on sale. I have no idea what it is other than probably polyester. Its kind of crinkly. I spread out the material and followed the bent shape of the wire and cut out the material with scissors. I had JUST enough material I think it was 4-5 yards.

Step 6
I then hung the rig on the clothes line outside and got a brush and some black acrylic paint (Apple Barrel) and painted the lines. It took a few coats to fill in dark since the material was gauzy. I painted both sides, front and back. It was easy to match the sides because the material is semi-transparent. I even painted over the stitching so you can’t see the black thread…or the crooked stitches.

Step 7
Once the paint dried, I took the wings back inside and proceeded to hot glue about 200 (or more) half inch sequins on both front and back to make the dots. This really makes the wings sparkle. I used the largest sequins I could find, they are silver. I bought the biggest pack and however many that is is how many I put on. I didn’t have enough time to sew the sequins, but I recommend that you do. Hot glue is, well…HOT. I burned the heck out of myself several times because the glue went through the cloth. Hot glue is also why the costume is retired now. Most of the spots have fallen off from the constant brushing into things. Take the extra time to sew the sequins on and you’ll be glad you did. I imagine the costume would pretty much last indefinitely that way. The large dots are sequins too, I started with one and made a spiral out until the size was where I wanted it. It sounds hard, but it wasn’t

Step 8
To cover the unsightly center of the plate and wires, I hot glued an old rabbit fur pelt I had over the whole plate, wrapping the edges around to the back of the plate. You could use fun-fur. it effectively hides all the wire ends and the plate.

That’s it for the wings.

The “tutu” is actually a boa that I made from a Muppets instruction sheet. The costume is fun and easy and DIRT cheap.

The table cloths I bought were already folded up nice and neat from the package. You need to cut the cloths into 1.5 inch to 2 inch wide strips that are about 12-16 inches long…just see what ever comes out even in your table cloths and adjust accordingly. The longer the strips, the fluffier it is.

Next stretch the pantyhose out like its doing the splits. Cut the panty off if its too bulky. If you think your boa is too long, use one leg (for instance, for little kids) tie a knot in the toe and attach it to a kitchen chair. stretch the hose out and tie the other end to another chair.

Now is the easy part. Take the strips of plastic table cloth and tie them around the stretched out pantyhose. The strips should be tied in the center in a simple overhand double knot so that the ends are an even length. Just keep adding strips until you run out of pantyhose or strips.

Tie a knot in the pantyhose at the end of the strips, cut off the excess and until it from the chairs.

Viola! a “feather” boa in custom colors, that doesn’t shed! I’ve thrown mine in the washing machine, but don’t put it in the dryer.

The head dress was just a cheap plastic head band that I attached some peacock feathers to. I used the “fish tail” style feathers and a couple of shorter ones too. I buried it in a cheap red wig (short) and then added some yellow and purple hair extensions by hot gluing them to a couple of purple ribbon-ed barrettes which I clipped to the wig giving it a pig tail look.

The rest of the costume was just my net shirt, a pair of green pants (to look like a flower stem) and my red Chucks. I tied some red feather boa pieces around my wrists and ankles.

Variations of this costume have won me several prizes including 4 first places. The flexible nature of the wings makes it easy to maneuver through doors and in elevators. It takes seconds to put on the wings- as fast as putting on a vest. The whole thing can be put on in under 5 minutes. Its easily transportable too. The wings fold together, just like a butterfly and fit easily in the trunk or back seat. You can also sit in a chair easily- even on a sofa! The wings flex around easily. Even bathroom stalls are possible, believe it or not!

The antennae are actually the hardest thing to maneuver because they are tall and at 5’9″ tall, I had to duck through all doorways and watch for low hanging lights. The only things not flame resistant were the feathers and ALL components of the costume can be removed in a hurry.