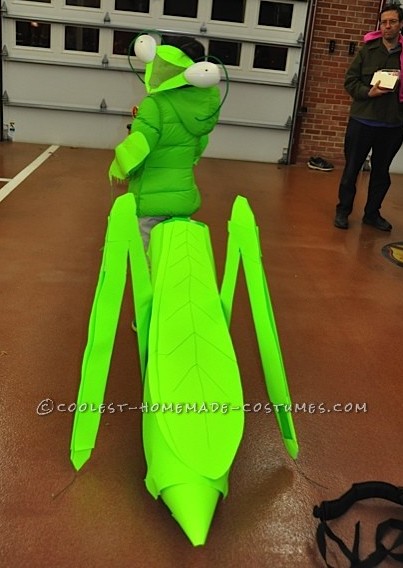 How it was made:

We made a mantis-shaped face mask from green poster board and cut out the middle. Then we attached the piece of green burlap to the back of the mask with hot glue (over the hole we cut). We stapled the head band to the top, back side of the mask. We stapled it in 3 spots across the top of the mask. We twisted 2 pipe cleaners together to make a longer piece. We did that twice to make 2 long antennae. Then we twisted one end of each antenna around the headband and slid them toward the front of the mask. For the eyes, we cut a small Nerf-type football in half. Then we rounded one end of each football half. We hot glued the football halves onto the mask. Then we drew small black dots on the footballs with permanent black marker.

We made a U-shaped bug butt out of 2 pieces of green poster board, with 5 strips of cardboard as ribs to support the U shape underneath. Then we made a cone shape from more poster board and duct taped it to the end of the bug butt. Each leg was made from 2 wire hangers that were unwound and then twisted together at 1 end to make a long, thin leg. Foam board was duct taped to the wire for shape and support. Green poster board was then added using rolled duct tape.

The 2 sturdy supports were connected at an angle using duct tape. The bug butt and the legs were then duct taped to the lower support. Each wing was then made out of two pieces of green poster board and attached to the back of the bug butt with rolled duct tape. We attached straps of green cord to the upper support to go around her shoulders (backpack style). She wore the upper support and straps underneath her jacket (which just happened to match the green poster board– Yay!).

The front arms were simply made from green poster board.  They were taped to her jacket with clear packing tape.

People really liked my costume, and so did the judges at our local fire department’s costume contest, so I won most original costume!  My 4-year-old brother said, “It’s a cwicket!”

I was concerned when my daughter decided that she wanted to try to win a prize at our local costume contest this year. I told her it would need to be pretty unique to win. She thought about being a number of things- a cheeseburger and french fries were toward the top of her list. I was even more concerned when she decided she wanted to be a praying mantis. After consulting my family and friends who are artistic, we all agreed that the best materials were probably going to be foam board and poster board.

Fortunately, we had just had some repairs done in our home the week prior, and we still had some heavy-duty cardboard boxes around. The box for a closet door assembly ended up being our lower support. The box for a window blind ended up being our upper support. It held together really well during trick-or-treating, and even made it up and down the hill we live on. It’s still in our garage!  My daughter doesn’t want to part with it yet. :) 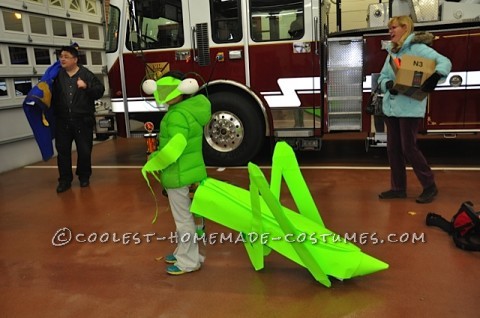