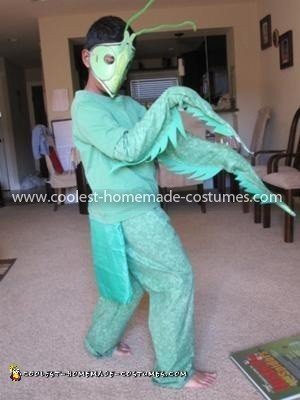 It all started when my 7 year old son watched the series “ Monster bug wars” on science channel and got totally into bugs and then reading books about them from the local library. Of all fascinating bugs, he picked ‘Preying mantis’ as his favorite.

In June 2011 (summer) he said “mama I want to be an insectologist. Hmmm….. I corrected him entomologist, and then he asked ‘Can I be a Preying mantis for the Halloween?’ I calmly replied “No dear, its way to hard to find that costume in the store. He persuaded “Mama can you try to make one?” My reply was “I don’t think I can really make that kind of costume.

Few days later we were visiting Mahabaleshwar (a historic town in Southern India) and while waiting in the parking, suddenly a preying mantis landed on my son’s arm. My 7 year old was totally mesmerized, still and gazing it carefully, although I freaked out to see it’s size of 5 inches approx. My son calmed me down as said “it does’nt hurt humans, come closer and look how beautiful insect it is!

I was totally amazed to see his comfort level in handling the green 5 inch insect on his arm which was now moving and climbed on his head and over to his shoulders. That moment I decided and promised him “You are going to be Preying Mantis”.

The beauty and mystique stirred my curiosity. Long and slender, quick yet graceful they stand on top of the insect world as regal creatures of the fields even in all their many colors of camouflage. I read a lot about Mantises in general and looked at the various kinds of it, however the green colored one became my favorite too.

For my 7 year old, I wanted it to be comfortable during his school parade and trick-o-treating time. After studying the pictures of Mantis, I came up with the idea as a simplest version of Preying mantis costume for a child.

The biggest challenge was to create two grasping, spiked forelegs (“raptorial legs”) in which prey items are caught and held securely and the head. First I prepared the mantis mask, instead of a head. The key is Preying mantis has huge compound eyes mounted on the triangular, almost alien-like head, so the mask has to look the best. The eyes and face were cut from the green foam and glued. I simply used the pipe-cleaners for the antennae.

Second, I prepared the forelegs. I used the foam to cut to create the spikes. I prepared the sleeves of the T-shirt and sewed the spikes into the sleeves. The front portion of the legs were created using buckram and pipe-cleaners so that it is firm and gives a nice triangular shape.
Last, sewed the regular pajamas and created wings using a green material (similar to what umbrellas are made of).

It took me just one weekend to bring it all together (this is because I do not sew regularly). My son really enjoyed wearing the costume very much. His costume was commented as “very creative one” in his school parade by his teachers and especially parents with boys. 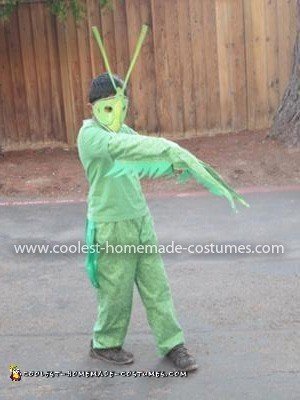 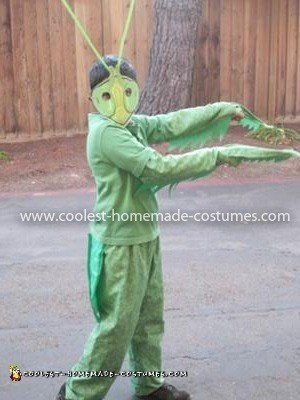 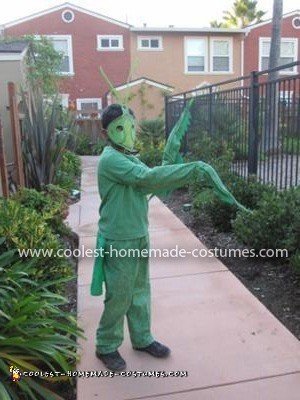