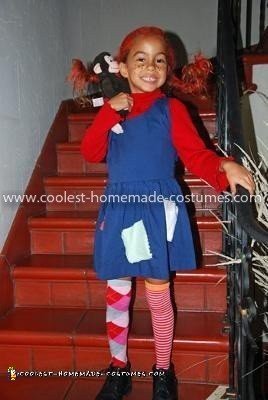 My daughter decided she wanted to be Pippi Longstocking for Halloween this year. We started by checking out local thrift stores to find a blue jumper and boots. After striking out at three stores, I decided we needed a different strategy. Ultimately, we found both the jumper and the boots on eBay for a total of $13.00 including shipping.

We used old fabric squares to make patches which I sewed on the dress. We bought the knee socks at the .99 cents store for $2.00. She had the red turtleneck and the monkey which I pinned onto her dress. To do the all important braids, I purchased, for 75 cents, wire from Home Depot which was positioned at the base of her head and braided into her hair.

The final touch was red spray paint bought at a local party supply store. Grand total for the Pippi Longstockings Halloween Costume was a little over $20.00. Most importantly, in the end, she was very happy with the costume and got many compliments — someone told her on Halloween night, “I’ve seen over 200 costumes, and yours is the best!”