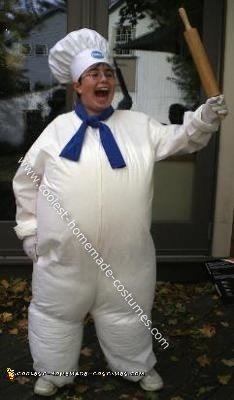 It started with a white painter’s coverall provided by a friend – also available at hardware stores for about $5. I always like to have an item for the genesis of a costume. Our family brainstormed what it could be for our 10 year old son’s costume. White rabbit? Astronaut? Snowman? Our son finally settled on the Pillsbury Doughboy Costume!

A very easy, no-sew costume. We picked up inexpensive white gloves ($2) and a chef’s hat ($5). After downloading a Pillsbury logo, it was spray mounted to the hat. The kerchief was made from remnant fabric. Two pillows were attached around his torso with belts. Added a rolling pin from the kitchen drawer and it was done!

A cookie sheet would be another cute accessory but we decided against it in favor of the trick or treat sack (white of course!).

He was a hit. His principal happened to be a chef and we took many cute pictures of them together!