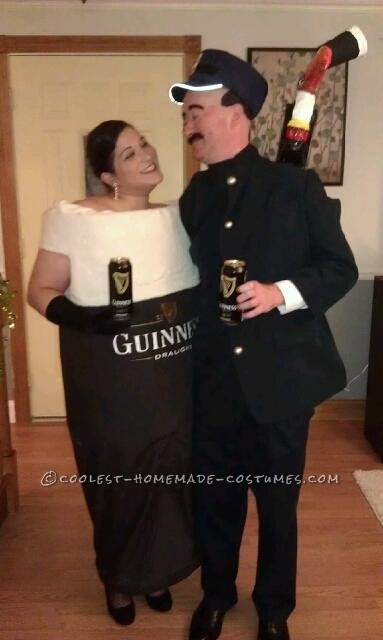 The best compliment I got on this Pint of Glamorous Guinness Beer and Zookeeper homemade couple costume was when one person – then another, then another, and so on – asked me, “Where did you buy that costume??”  And then the widening of the eyes and the slight jaw drop when I revealed that I didn’t buy it, I made it!  People were amazed at how well it turned out! It all started over a pint.

I was having a Guinness at my local watering hole and suddenly thought how it would be really cool to go to the Halloween party as a giant pint of Guinness.  When I started the hunt for the perfect costume, well, there was no costume.  So, rather than get discouraged, I decided to make my own Guinness costume, over a period of about a month, working here and there.  I decided to be a sexy Guinness, the girl emerging from the glass, and it turned into “Glamorous Guinness”, where the costume was almost like an evening gown but still obviously the glass of beer.

To start, I purchased a couple of yards of carpet that you buy off the roll at a home improvement store and duct-taped it into a cylinder.  Then I took an inexpensive twin size black sheet that I had found at a linen store and glued it around the cylinder.  At a charity store, I purchased belts and a piece of off-white, terrycloth fabric.  I experimented a bit with the belts at the bottom of the “dress” to try and get the elongated tulip shape of the glass and when I had the correct positioning, I duct-taped and glued them in place, then I tucked up the remaining black fabric on the inside and glued that as well.

To make the head (foam), I cut a strip of the terrycloth and glued it around the top of the cylinder. I then cut armholes in the sides, toward the top, and glued 2 more strips inside the lip of the “glass” (these got tucked into my camisole so that I appeared as emerging from the glass.)  For the logo, I printed up the letters and harp, cut them out and glued them on the front of the costume.  I added a pair of opera gloves, some glitzy earrings (which I made from a bracelet), high heels, fishnets and did my hair in an elegant upsweep for an overall glamorous effect!

Turns out, I had a date! So he went as the zookeeper from the old “My Goodness, My Guinness” and “Lovely Day for a Guinness “advertising posters that you still see in Irish pubs.  The toucan is practically synonymous with Guinness, so I decided to have that perched on his shoulder.  For his costume, we bought a matching jacket and pants at a charity shop, turned the collar up and took a piece of fabric from the hemmed sleeve and attached it at the neck to give it the feel of a jacket from the 30’s and 40’s.  I took bright gold nail polish and painted some big buttons I had to emulate the jacket in the posters.  He shaved his head (!) and I used a quick-dry gel eyeliner on his mustache  eyebrows and to paint in the hairline.  The cap was a Styrofoam hat cut to a pillbox shape, covered in fabric and attached to a visor.

The toucan was actually the most challenging bit and it started with an empty paper towel roll and a papier mache project (flour and water).  When it was half dry, I bent it at a 45 degree angle to replicate the toucan’s position in the poster.  I also made the beak with papier mache and attached it to the body. When it was completely dry, a week later, I used several coats of black paint and wild nail polish (blue, green, orange, etc.,) to paint in the details.

To make the wings and tail, I folded skewers into aluminum foil and painted it black.  We did a trial run, rigging it up onto my date’s shoulder using wiring across his body, but on the day of the party, we couldn’t quite get the toucan to stand up straight, which is why he is crooked in the photos  (he turned out so well, I wanted to share photos of how he looked from the side but not attached to the costume yet) . Eventually, the jacket had to come off, and my date looked like the train conductor from Polar Express . . . but everyone “got” the concept and thought we looked great!  I would make my own costume again in a heartbeat; already have some ideas for next year!