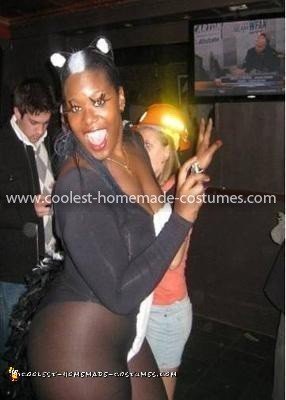 I decided to make a “Pepe Le Pew” costume because I not only loved the cartoon, but I had never seen one before. I Googled it for hours, trying to find “skunk” accessories, but I could only find them for children and dogs. So, I got to work.

I bought a black long sleeve leotard from American Apparel, and black tights. I went to a fabric store and found white fleece material. Then I went to Ricky’s and bought a pair of black cat ears, white hair spray, as well as black and white feather boas. I cut out a piece of the white fleece material to look like my stomach, then sewed it onto the leotard.

I used the same white fleece to sew onto the black cat ears, making them look more round. I folded the black and white feather boas in half and tied them together at the end to look like a black fluffy tail with a white stripe down the middle. The tail was tied around my hips with a black drawstring I took from my sweatpants.

I topped it off by spraying a white streak down the middle of my hair, walking around with a tiny perfume bottle, french accent and boom, I became Pepe. 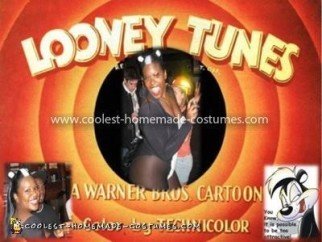 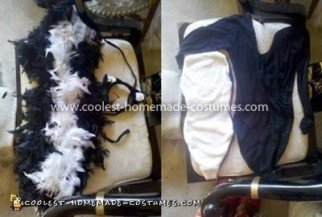