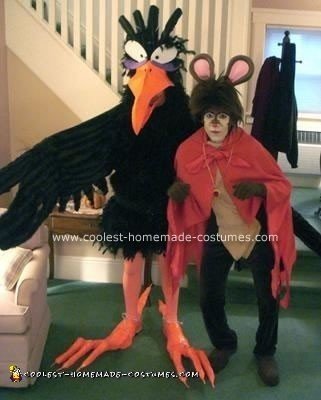 Having learned that my favorite childhood movie, The Secret of NIMH, is currently being remade for a modern audience, I decided to bring the original characters to life this Halloween with Homemade Secret of NIMH Costumes!

I bought a women’s brown leisure suit so it would be skin tight on me. I found matching brown gloves that came packaged with a scarf and hat (for extra fabric). I cut up the hat and glued it to old sneakers to make mouse feet. I cut the scarf, rolled it around wire and glued it closed to make a tail. This was bent, fished through a hole in the back of the pants, and held in place with a tight belt. I cut the lighter brown fabric to shape Mrs. Brisby’s stomach, chest and hips, then glued this to the front of the leisure suit, completing her body.

I found a large red table cloth for the cape. Simply tie it at the neck and cut strips at the bottom so it’s ragged.

The ears are the top part of foam fedora hats, found at craft stores. (Its like an Indian Jones hat). I cut the tops off, cut out circular shapes from pink foam that would fit inside, glued them to the brown hat tops, and attached them to the 80s rocker wig by bending and gluing wire in place.

The amulet is just a prop I found at a costume store. Apply make-up and you’re Mrs. Brisby!

I used three yards of faux fur fabric for the wings. (This was a great furry material with a sheen and horizontal lines). We cut a hole in the middle for the head to stick out from. When my partner tried it on, there were a few extra feet at both ends passed where his hands were. This extra length is where the wing tips were created.

Spreading the entire fabric out on the floor so it’s length was horizontal, I glued a thick wooden dowels, also horizontally, in the middle at both ends. (When worn, your arms should stretch out and be able to grip the start of the dowel, which means you have to keep a few inches unglued to use as a handle for puppeteering.)

Once the dowels were dried in place, I folded the material and cut out the shape of the wings so they would be even. Then glued wire inside the long feather shapes so they would maintain their curve and not dangle down. I glued feather boas to shorts to create tail feathers.

I shaped an upper and bottom beak out of wire mesh, paper mached it, wrapped it in orange duct tape and stapled elastic bands to the ends. I made the eyes out of white, black and purple foam, which were glued to the upper beak. Long single feathers were glued to the back of the eyes so they stick up like Jeremy’s hair does. I then glued a feather boas to the back to really add volume. Then on a black hooded sweatshirt I glued more feather boas on the top and back of the hood.

The idea is to put on the sweatshirt first, then put on the wingspan, making sure your head and the hood come through that hole in the middle. The lower beak goes on over your head, sitting around your neck. Next, the hood is put up and then the upper beak is put on around your forehead and the back of the hood. (This all makes sense when you look at the photo.)

The feet are formed from newspaper wrapped around wire. Keep adding newspaper and rolling masking tape around it until the crows feet look right. Once they look how you want them, wrap orange duct tape around the them and around old sneakers as well. This way you have wearable feet! Get orange tights to match, and you’re done, Homemade Secret of NIMH Costumes!