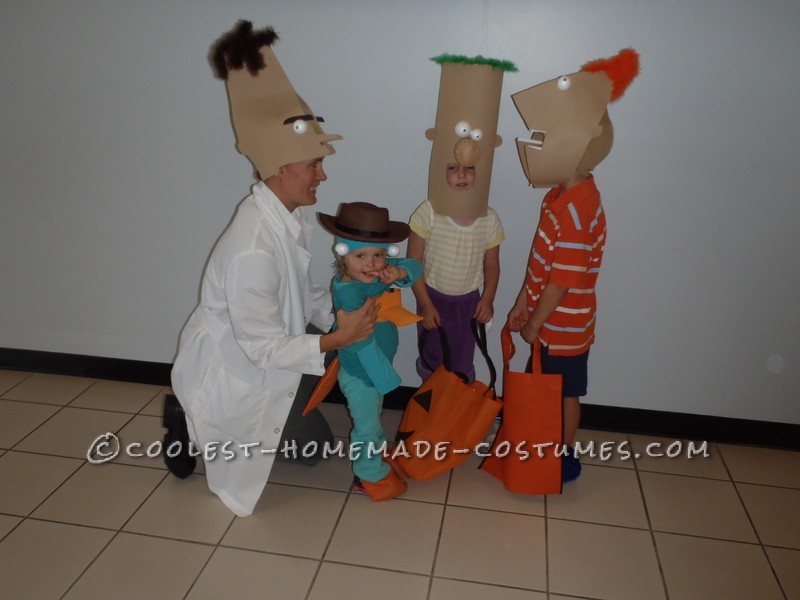 My kids love Phineas & Ferb, and l have to admit, l enjoy watching that cartoon with them. When trying to come up with an idea for Halloween costumes this year, l thought of being Phineas & Ferb. l figured that Phineas, Ferb, Agent P. and Dr. Doofenshmirtz  wouldn’t be too hard to make, and l already had a few ideas in mind.

First we figured out which child was going to be which characters, then l hit the local consignment shops looking for just the right clothing, in each child’s size. l drew out my ideas, and decided to go with craft foam for the masks that l needed to make. These costumes were actually not too complicated to make.

Phineas: clothing~orange striped shirt, navy shorts, blue converse sneakers.For the mask l drew the outline of Phineas’ head, then cut it out from 2 sheets of foam. l hot glued the top seem together, leaving the bottom open. l used styrofoam balls, painted, for the eyes & glued one to each side of the head. For his hair l glued some trim, that l found in the sewing section for the store. l cut out the shape of his mouth and glued white strips in there for his teeth. Once the mask was complete, l had to figure out how to attach this to my child’s head~l thought a  ski hat might work. l went out and bought a few of them, then hot glued the mask to it. It worked perfectly! For his shoes, l took a pair of my son’s sneakers and wrapped felt around each shoe and hot glued it in place. Then l took white foam and cut pieces out to make the fronts of the shoes~l was trying to make them look like converse.

Ferb: clothing~yellow shirt, purple pants, black converse sneakers. For this mask l used 2 of the larger sheets of craft foam and glued the ends of them together to form a cylinder. Then l cut out ears and glued them to the sides. l used painted styrofoam balls for the eyes, one large, one small. For his nose l took felt and made a small cylinder, then glued a circle onto the end of it, stuff it with cotton balls, and glued it to the mask. l placed this on my son’s head to figure out where he would need to have cut outs for his eyes. Then l took it off of him and cut out the mouth, making sure it was open enough for him to see out of. On each side l made a half moon cut, so that it sat comfortably on his shoulders. l cut a circle of foam to fit on top of the cylinder and covered it with green feathers for the hair, then glued it to the top of the cylinder.  For his shoes, l took a pair of my sons sneakers and wrapped felt around each shoe & hot glued it in place. Then l took white foam and cut pieces out to make the fronts of the shoes~l was trying to make them look like converse.

Dr. Doofenshmirtz: clothing~black shirt, green pants, black shoes, white lab coat~l had the shirt and shoes, found the pants at a clothing swap, and bought the lab coat from a former nursing student. For the mask l drew the outline of his head on the craft foam, then cut it from two sheets. l glued those together across the top. l glued on painted, styrofoam balls for the eyes, and drew on the mouth. l glued brown trim to the top for his hair, then glued the mask to a ski hat.

Agent P. (Perry the Platypus): clothing~teal pants, shirt, gloves, ski hat . I glued painted styrofoam balls to each side of the ski hat for the eyes. l found a light brown hat that l spray painted dark brown & then glued a black ribbon around it. For the beak l used orange craft foam and cut out the flat shape of it, then cut a slit in the middle. Then l cut out a square like shape from piece of foam that was folded in half. l glued one side together, then stuffed it with cotton balls, and then glued it the rest of the way around. l left the very ends of it open a little so that l could glue those flaps to the flat part. l slid them through the slit and glued them into place.

For the tail, l cut the shape of it out of two pieces of large craft foam. l drew the lines of the tail on each of the pieces, l cut a piece of elastic to fit my daughter’s waist, and attached the foam to that. Then l glued the sides of the tail pieces together & stuffed it with cotton balls, then sealed the ends of with glue. For the feet, l tied a piece of felt to each of her feet, the way it was tied, they looked like webbed feet. After having her walk in it, l realized that wasn’t working, the felt was sliding around her foot and l didn’t want her to trip over it, so onto plan B. We had a duck costume from when the kids were babies. l cut the feet off of it, then cut a circle through the bottom of them. They still had a ring around the back of them. So when getting her dressed, l put the clothes on, then the tail~tucking her shirt into the elastic band on the tail. Then socks, slide the duck feet on, sneakers, and then l stuck a bit of duct tape on the bottom of the duck feet to hold them to the top of her sneakers~worked out much better than the felt.

l enjoyed making these Phineas, Ferb, Agent P. and Dr. Doofenshmirtz costumes for my kids, and loved their expressions when they saw them completed! We walked in two local Halloween parades to show them off. The kids loved when people would yell “Phineas & Ferb!” We received many compliments on the costumes, from both kids and adults! 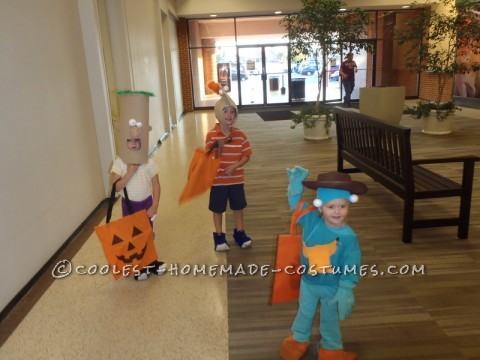 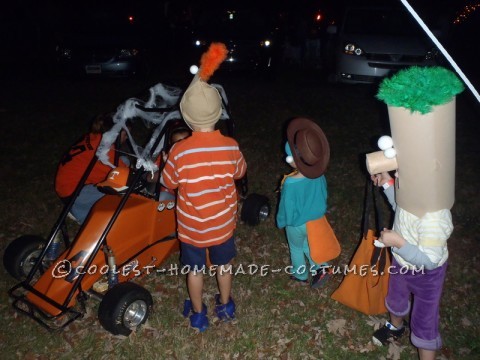 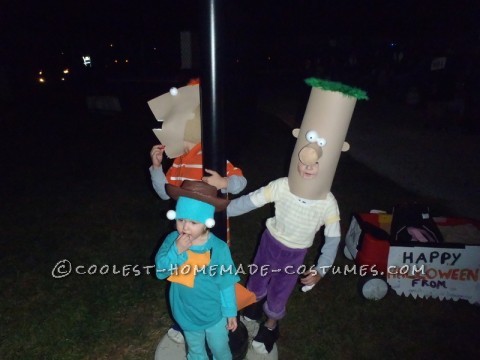 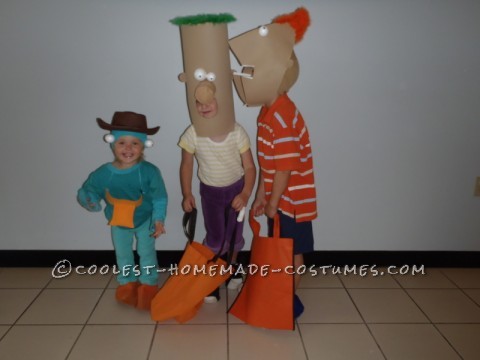 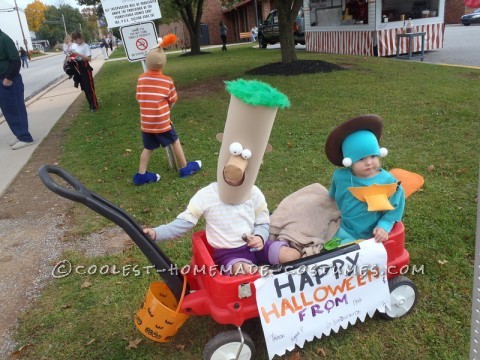 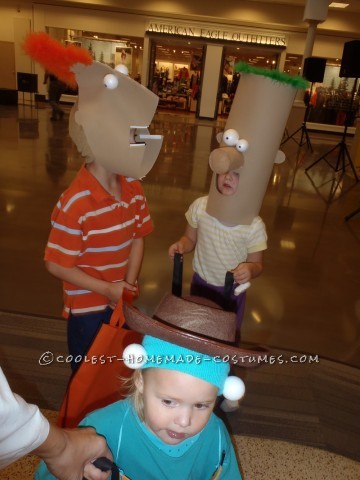 The Cast of Phineas and Ferb Family Costume