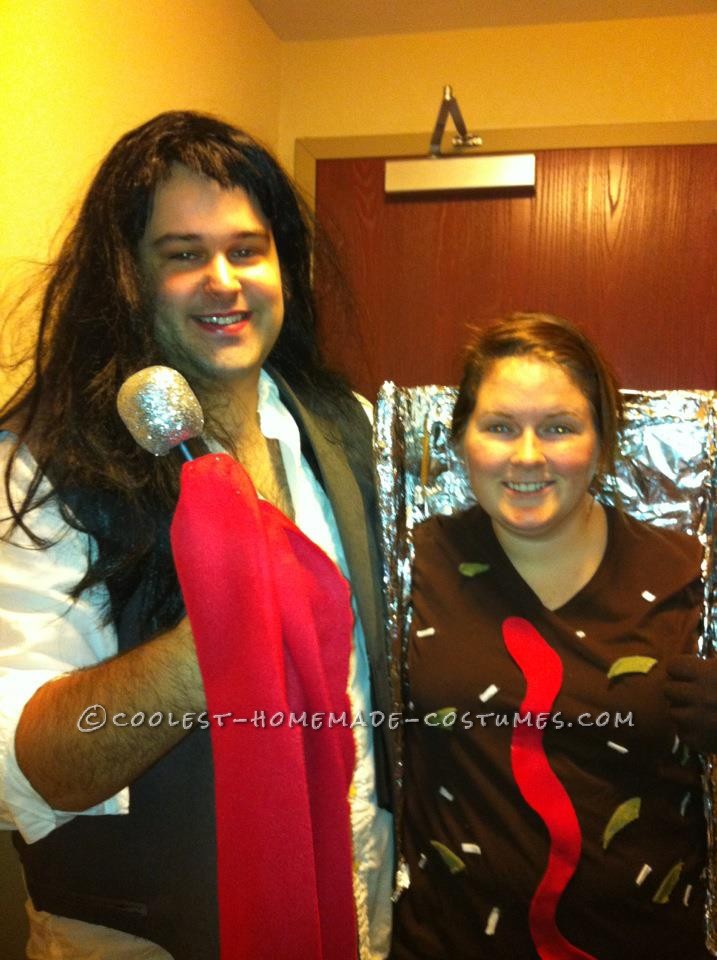 My boyfriend and I dressed as Meat Loaf and meatloaf last year for Halloween. He was Meatloaf the music artist and wore a basic suit jacket that he cut the sleeves off of, a black wig, and carried a microphone with some red fabric on it. My costume was a little more time consuming. I was a pan of meatloaf. I took a brown long sleeved shirt and hot glued green chunks and white slivers of fleece onto it to look like peppers and onions. I then hot glued a long snake like red bit of fleece down the middle of the shirt to look like ketchup.

I used a chip box from the Jimmy John’s I worked at for my meatloaf pan. It was the perfect height to cover just my torso which meant I would be able to sit. I cut one of the sides off of the box and two holes out for my arms. The holes were like long ovals so I wouldn’t be constricted when dancing (well, as much). I put a belt through the back part of the box which was still in its entirety by making two slits, this prevented the box weight from being all on my arms.

Then came making my box look like a pan. I took extra fleece I had from the onions, peppers, and ketchup and rolled it up and padded the arm holes and the front of the box to look like the rolled edge of a pan. I then hot glued it to the box. I then rolled out aluminum foil all over the box and hot glued it down. This part was kind of dangerous as the hot glue made the foil extremely hot, but I was in a hurry and impatient, so I did burn my hands a few times, but all is fair in love and Halloween. I made sure not to glue the belt and gave it the ability to hang out of the box (which shouldn’t need to be said, but just in case). I made a little tomato and carrot out of extra fleece and glued it to some brown stretch gloves.

We went to a party for my college which was a total bust. It was really crowded and my costume didn’t move around very well. The people at the party also couldn’t figure out what we were, which made me feel really bad because I thought the costume didn’t read well. It turns out that after I told them we were meatloaf and Meatloaf, most of them had no idea who Meatloaf was, which made me feel reeeeeally bad, for the future of this world. The great thing is, we had to wait outside of a venue for a while in cold weather and while all of the other girls were freezing in their trampy outfits, I was super warm in my tin foil box. Another great thing is that one of my friends was DJ’ing some club type music so I just started doing the robot and everyone assumed I was one.

The costume was a hit in my eyes and I thought it looked great! We got a lot of compliments from people who actually knew who Meatloaf was, which is everyone that matters to me.