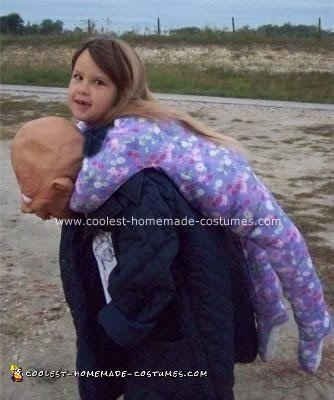 We were dressed and ready for bed but sitting in our living room watching a little nighttime TV when all of a sudden our front door gets kicked in and a crazy looking little man comes running in.

I freak out and my daughter “Gracie” jumps on this guys back and won’t let go. He is running in circles trying to throw her loose but she is holding on around his neck for dear life. He runs out the door carrying my precious little “Brave” girl on his back.

I grab my cell & call 911 as I follow in pursuit on foot, to let them know whats going on.

The authorities informed me that a psych ward patient Name Buford Beckham from psych-Ville Mental Ward has escaped and they had been looking for him. They said they didn’t think he would do anything to hurt my precious little girl but that still didn’t make me feel any better.

This guy looked crazy and nutty!!

He was finally captured and taken back to the mental ward where he belonged and Gracie is back at home with me where she belongs. She was given an award for bravery by the Police dept.

Good thing I was able to get photos of them to send in for you guys to see.

Please leave comments below so Gracie can read them all. She is very excited about entering this costume contest because she said the ones she won around here were lame!!

This is how we made this Psych Ward patient with kid on back Halloween costume… and yes 7 yr old Gracie helped with it too!!

She wanted to do one of the ones like everyone else where she was holding her head in her hands… but I told her let’s do something different.

I found this crazy man mask at our local grocery store for $2.99 and got it. I looked at resale stores for a big hospital gown but was unable to find one with such short notice.

Gracie happened to have a pair of hospital pajamas but they were not all that big on her, but we managed to make them work. She had the bottoms and top that tied in the back. So I got a babies old onsie and filled it with stuffing then inserted into the mask to fill it out…. I then began sewing the mask onto the front of the hospital top.

I got a pair of kiddo pajamas with the feet in them and stuffed them really good with stuffing. Then I stitched the top of pajamas to the top back of a coat collar but left most of the arms unattached. I would say it was sewn from where the arm bends to the other arm where it bends, and from the elbow down it was not sewn. I then put two diaper pins to attach the wrists of the pajamas together.

When Gracie put this on I would tie her hospital gown top in the back, and she put the pants on…. then the coat… once she got the coat on she would just grab the pajama hands and pull them over the head of Buford the psych ward patient…..Gracie wore a pair of her old boots with this, and had so much fun.

Gracie couldn’t believe how many people were stopping her to take photos and winning the contests. Adults and children alike would stop and stare at her trying to figure out if it was just one person in there or if she really was on a little kids back. It was funny standing back and just watching peoples reactions.

Gracie really played this costume well… when people would start staring she would look around at the mask and say “Hey crazy man, you need to stop now…because I am not letting go until they get here to get you and take you back to that hospital”! Then when she would go up to someone home to trick or treat she would just stand there, then she would look at the mask and say “Will you put the bag up there so they can put the candy in it, because I really want it” then she would raise her (psych ward patients) hand up with the bag for the people to put the candy in, as they began laughing hysterically. It was too much… she is a little ham.

Gracie would love to read comments of what people think about her homemade costume so please don’t forget to leave a comment down below. 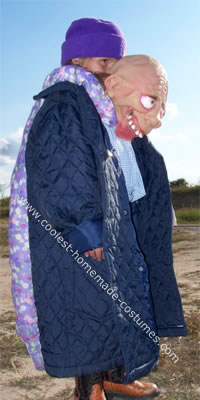 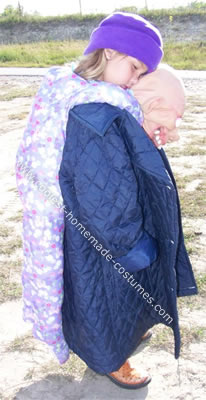