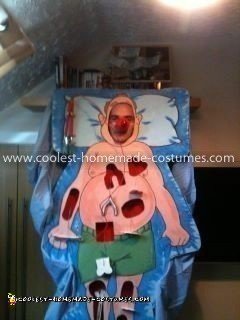 I first had the idea to make the operation costume when I was playing the game with my younger brother, I then had to think how could I make it fully functional??… I’m a carpenter by trade and decided to use a sheet of 6mm MDF to draw the outline on.

I wanted the costume to be as accurate as possible so I borrowed an overhead projector from a local school to transfer the picture on to the MDF. I then painted it with paint I had in my shed from painting the house. I then used a jigsaw to cut out the holes for the body parts and made boxes from off cuts of the MDF and glued them onto the reverse of the costume.

Then came the tricky part, how was I going to make the game actually work?? I had thought about using thin copper sheets, cutting them out and placing them inside the cut outs, but the copper was too expensive so I striped copper cable and bent it round the cut outs and that seemed to work.

I purchased a set of BBQ tongs and connected a length of cable to it and wrapped them in red insulating tape. I found a 12 volt bulb in my shed and a reversing alarm and wired them to a cordless drill battery.

But how was I going to make a nose? I struggled for a while thinking about it and then I had a brainwave… I used a ball of the top of detergent bottle put the bulb in it and used red insulating tape again to cover it.

I then had the problem of being able to carry the costume because it was becoming slightly heavy so I screwed an old school bag to it so I could keep my hands free. I then used a bed sheet and stapled it around the cut out so people wouldn’t see all the cable and the school bag. I hope everyone enjoys this operation costume as much as I did making it.