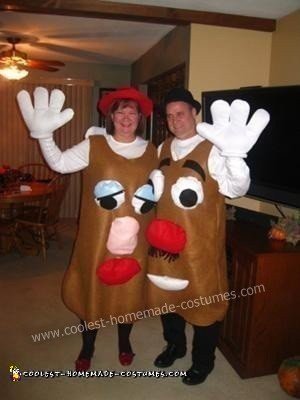 Having seen pictures of Mr. and Mrs. Potato Head DIY costumes on this site, I decided to give it a try. I used about 2 1/2 yards brown felt for the bodies and various colored felt squares for the parts. I sewed the top and sides of the bodies and then used Velcro to secure the eyes, nose, and mouth.

For the body parts, I sewed them leaving a small area open to add some stuffing and then used a hot glue gun to close the opening. The pupils and lashes on the eyes were secured with glue. I purchased Mr. Potato Head’s black hat at Walmart and found Mrs. Potato Head’s red hat at a local resale shop. 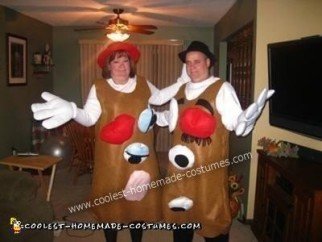