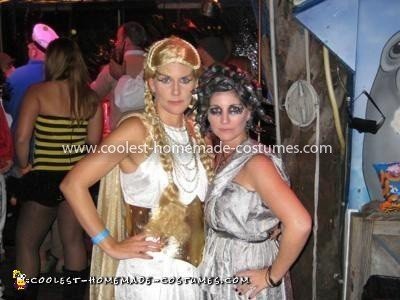 I really wanted to be Medusa, but wanted a unique headpiece. I bought a case of rubber “squishy” snakes and wired them the mesh of a black wig, making them seem like they were slithering through each other. It was helpful to have a wig form head, I got one for 25 cents at a thrift store. I wired on 12 snakes in all and pinned any loose black wig hair up so the head piece looked completely like snakes. I then spray painted it black, coated the tounges with red glitter glue, the eyes with silver glitter glue, used a silver paint pen to makes the snake markings and added a touch of glitter glue all over the snakes. I used $7 curtain panels from Kmart for the dress and, of course, went crazy on the eye make-up and added jewelry that I already had.

My friend was Athena and I made her costume from the same curtain panels in white. From Home Depot, she made the spear with copper pipe and foam board. The shield is from foam board, as well. She glued and spray painted my extra snakes on the shield and we were a mythology match. I had extra gold material for her armor and then hot glued on a few embellishments. She threw some chains on from Home Depot, added a wig and some warrior make-up.

We had a blast making and wearing these Homemade Medusa and Athena Costumes! 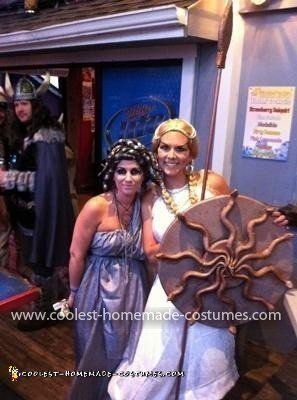 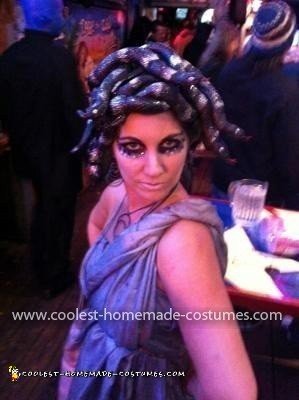 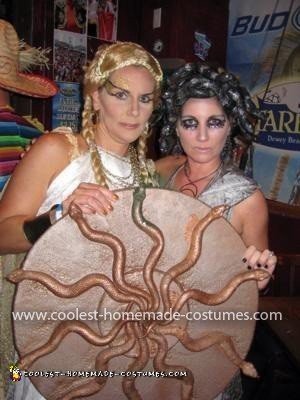